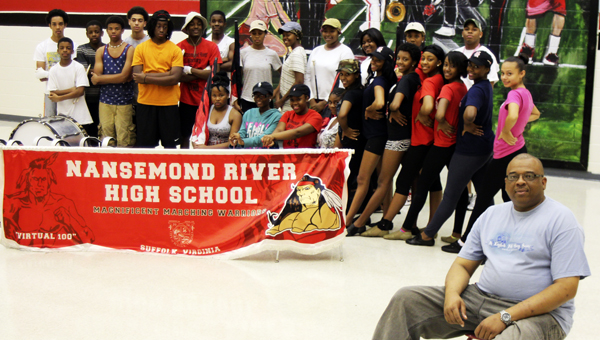 Just as it’s possible to become stateless, the vagaries of the world can also leave one without a former high school — as those who attended John Yeates High School discovered.

It’s a phenomenon a group of former John Yeates High classmates mulled when they reunited last October at Nansemond River High School’s homecoming, according to one of them, Reese Johnson-Nixon.

“We didn’t have a high school anymore,” Johnson-Nixon said.

The Suffolk resident began telling her friends about the successes of Nansemond River’s marching band, as well as how it had been hit by funding constraints.

Pretty soon, they decided to create an outlet for their frustrated school spirit. A booster club was out of the question as none of them have children at the school, so the Suffolk Band Alumni Association was born, Johnson-Nixon said.

“We come from all over the U.S.,” she said. “As far as Hawaii, probably even further. It’s our way of giving back to the community.”

Edward J. Woodis, in the role at Nansemond River High School for 13 years, is among Hampton Road’s longest serving band directors, according to Johnson-Nixon.

Rising senior Sierra Maddox, the dance captain, is leading another fundraising effort. Folks are encouraged to donate $5, and the money is being collected at the school.

“It will save our parents money,” she said.

Tickets at $25 include three hours of bowling, shoe rental and entry into a drawing. Lane sponsors are being sought, and the event is from 1 to 4 p.m.

“It’s important for everybody to support their local band,” Nixon said.

Flag captain and rising junior Ebony Fetlon, meanwhile, is helping with Outback Night. The cost is $20, which will buy a six-ounce steak, five-ounce chicken breast, Caesar salad, cake, beverage and entry into a drawing.

Tickets for both events are available at the Nansemond River High School band room Monday through Thursday from 9 a.m. to noon.

For more information on the SBA fundraisers, including about lane sponsorship, call Reese Johnson-Nixon at 452-8731 or 335-7311.