After spending its 25 years in business on the same half-block of West Washington Street, Bunny’s Pawn Shop is renovating a former Laundromat on a different street for its new location, having been forced out of the place it has rented for the last eight years.

The business has to move, because most of the block is being sold to Monument Construction, which plans to renovate the buildings to put 68 loft apartments and retail spaces there. 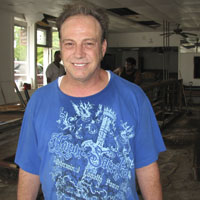 John Russo III of Bunny’s Pawn Shop pauses from his work renovating the new location, in a building formerly occupied by a Laundromat, about two blocks from its current location.

The buildings were formerly owned by Eric Menden and George Hranowskyj, who are serving prison terms for their roles in tanking the Bank of the Commonwealth by overdrawing accounts, demanding lower interest rates and assisting insiders in concealing the bank’s non-performing assets.

Bunny’s Pawn Shop, the only remaining business in the strip, was told July 2 it must be out by July 21, said John Russo III, who manages the business owned by his mother.

The Divine Church of Deliverance and Transformation, which was next door to the pawn shop, has already moved to a building in Whaleyville. The rest of the buildings up for purchase by Monument have been vacant for years.

“I wanted to stay up there, but there’s no place for me,” Russo said.

The business was offered one of the new retail spaces, but it would be too small, he said. The Laundromat on South Saratoga Street provided more space.

Russo and other workers were in the building on Friday, tearing out infrastructure that fed water to washers and heat to dryers.

“I can only do so much before I can bring my stuff in,” Russo said.

He said he deliberately chose to stay in the historic downtown, rather than moving closer to big-box stores such as Walmart.

“I want to stay downtown,” he said. “I’m used to downtown. I just hope it all goes smoothly settling in here.”

City Council is set to consider the conditional use permit request for the Monument Construction project at Wednesday’s meeting.