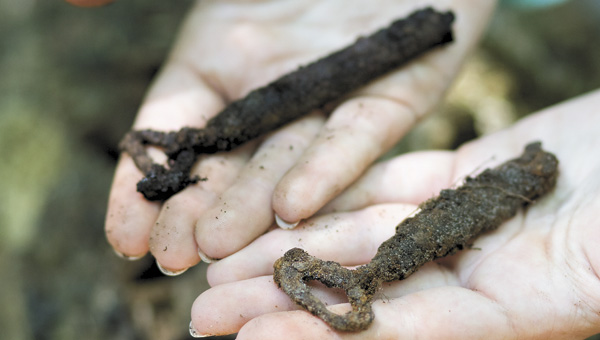 American University doctoral student Syndi Goode displays artifacts — specifically, keys to open tins of food — that her research team uncovered at the site of a former labor camp in the Great Dismal Swamp.

Let’s call him Walter George. He lives in captivity on a plantation somewhere in Tidewater, his recent ancestors having been captured by slave traders in West Africa.

Early in the year of 1800, both men are making their way to the swamp, which in their time is 10 times bigger and considerably less accessible than today.

George, with wife and children, strikes out for one of hundreds of autonomous communities of escaped slaves, given sanctuary by William Byrd II’s “vast body of mire and nastiness.” Byrd had led a surveying expedition into the swamp almost 70 years earlier. 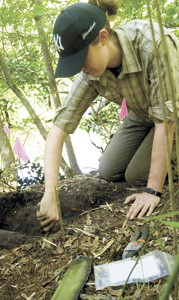 The history our fictional characters represent — on the one hand, freedom-seekers who hope not to be discovered; on the other, workers laboring on the network of canals and lumber operations — is gradually being unearthed by students of archaeology, anthropology and history.

“A lot of people lived out here before the Civil War,” says Professor Daniel Sayers of American University, who initiated the Great Dismal Swamp Landscape study in 2002 and has been leading field classes into U.S. Fish and Wildlife Service refuge.

“Thousands came from a variety of backgrounds, starting with indigenous Americans. They found a place to live … to remove themselves from the world outside.”

Sayers, whose latest — and, he says, final — field class wrapped up June 14, has been excavating former maroon camp sites, turning up various artifacts including what he believes were defensive weapons. “Maroons” (from the Spanish word cimarrón, meaning fugitive or runaway) were runaway slaves who formed independent settlements around North America, South America, Central America and the West Indies.

Meanwhile this spring, anthropology doctoral student Syndi Goode led a small team digging at a different site, where a labor camp once rested.

Laborers, she said, were given provisions and sent off with a quota of shingles to produce. Their superiors didn’t particularly care how they did it. “They were given a fair amount of leeway,” Goode says.

The researchers say evidence collected so far supports the theory that maroons subcontracted their labor to those enslaved by, or perhaps sometimes working gainfully for one of the many companies engaged in the trade at the time.

“I really want to question how the laborers were working with the fugitives, rather than resisting against them,” says Goode, who expects to use grant money to return to the swamp to look for answers.

Sayers says the swamp supported communities of maroons going back to the founding of the United States.

Slavery’s abolition with the end of the Civil War is an obvious answer why they ceased to be. Other reasons may also have contributed. According to Sayers, the arrival of labor camps could have shaken the maroons’ sense of security and seclusion. The discovery of possible “defensive items” and structure back this up, he said.

“Company workers were out in the swamp, living in company settlements, going out several miles at a time, days at a time, lumbering,” Sayers says.

“That becomes a threat, then, to the safety of these interior communities. Suddenly these outsiders are betraying their location. That’s when you start to see the development of the defensive posture.”

So it was a case of George meeting Finley.

George had managed to escape oppression, finding sanctuary for his family in a community built on a patch of slightly higher ground, deep within the swamp. Families teach their children, care for the elderly, hunt game, forage for edible plants and perhaps grow rice. Life is far from easy, but they are their own masters.

The stability and autonomy they enjoy is threatened with the coming of Finley’s labor camp. Finley doesn’t care how the slaves and laborers under his direction get the shingles ordered of them. Perhaps some of Finley’s workers joined the maroons they encountered, setting the stage for recovery expeditions and reprisals.

Nevius explains why he joined Sayers’ class with a rhetorical question: “How am I able to use this experience learning about archaeology to augment the paucity of primary source documents? I’m interested in figuring out ways to interpret those silences in the documents based on my experiences here.”

Kathryn Benjamin, a doctoral student from the University of California Berkeley’s Department of African-American Studies, sheds tears while explaining that the swamp communities were an example of successful early black resistance.

“I think it can give a great sense of pride to what it means to have a black community in Suffolk,” she says.

The story of the swamp maroons has lessons for modern America, Sayers argues.

“The world we live in right now is not perfect,” he says. “I think there is a need for different visions of how to proceed in our collective future.

“I think we can look to the present, but we can also look to the past — to people who successfully developed new ways of living.”

A brief history of nuts