She would have started there in the fall, but a unique change of events has her now signed with a school in New Mexico, where she will face a higher level of competition. 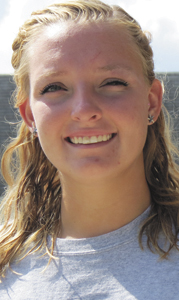 Such a silver lining to a tumultuous 2013 seemed unlikely, particularly back in March, when Haley was lying in the intensive care unit at Sentara Norfolk General Hospital.

A good start to the year with the Lady Warriors was interrupted in the fourth game when, after she threw a pitch, a line drive hit her in the face, resulting in facial fractures and three days in the hospital.

Her recovery went smoothly, but she did not play for the remainder of the school season.

Then, while preparing to play for the Sting in late June, she learned some surprising news about WVU Tech head coach Karin Gadberry, one of Haley’s primary reasons for signing with the school.

“My coach decided that she wanted to take a different route and decided to change schools,” Haley said.

In three years at WVU Tech, Gadberry had become the winningest softball coach in school history, but the opportunity opened up for her to interview for a job at a National Collegiate Athletic Association Division II school.

New Mexico Highlands University represented a significant step up in competition level, and it was also closer to family where she was from on the West Coast.

“It was just an opportunity that I couldn’t pass up,” Gadberry said.

Through interactions over the last year and a visit to West Virginia, Haley had learned Gadberry’s coaching style and loved it because of its similarity to that of her father, Scott Haley, Sting head coach.

Eryn Haley discussed Gadberry’s departure with two of her Sting teammates, Alysia Cavone and Katelyn Bates, who had also been bound for WVU Tech. They called Gadberry with a plan.

“We told her, ‘Hey, we want to follow you wherever you go. We want to check out the campus,’” Haley said.

“When she said, ‘OK,’ that showed me that that was a true, dedicated coach,” Haley said.

Gadberry said, “I’m truly honored that they would want to continue to play for me. I’m very humbled that I’ve made that sort of an impact that fast on somebody’s life. I think it’s a great thing when you can find those types of people in your life.”

Haley checked to make sure the school had her desired major, biology, and described her impression after visiting the campus.

“It feels more like a home at New Mexico, and I think that’s where I was supposed to be to begin with,” she said.

Gadberry convinced the school to pick up the three girls, who have now signed financial aid agreements and National Letters of Intent with New Mexico Highlands University.

Scott Haley praised his daughter for taking the initiative in this endeavor, and said her family supported her 100 percent.

“To achieve dreams you don’t put limitations on where or what you can potentially (go or do),” he said.

Suffolk’s Alexis Banks and Jazmine Tilmon are only 12 years old, but they have already made a habit of qualifying... read more