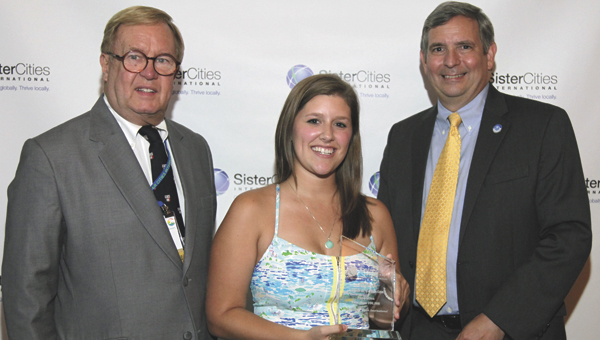 She spent the last year teaching English in Thailand after graduating from the University of Virginia with a major in foreign affairs, part of which was spent studying abroad in Italy. She will depart this week for Florida State University, where she will work on a master’s degree in international education. She hopes one day to work promoting study-abroad opportunities for high school and college students.

Her cosmopolitan nature made Odom the perfect candidate to represent Suffolk recently on behalf of Suffolk Sister Cities at the organization’s conference in San Antonio, Texas. She accepted an Innovation Award for Youth and Education for the Suffolk organization and was able to make friends from around the world.

“I really like meeting people from all over the world,” Odom said. “It’s great to make those connections.”

Odom’s love of travel was cemented at an early age. She has an aunt and uncle who work for the State Department and have lived in many different countries, and many of her earliest trips were family vacations to visit them.

“I was really lucky to be able to do a lot of traveling at a young age,” she said.

In high school, she convinced her parents to allow her to go to summer camp in Paris, and that experience further solidified her confidence in her career choice.

“It just kind of grew after that,” she said. “I really would like to work in the study abroad industry, encouraging more students to study abroad. I think it’s really important to get some idea of what the world is like outside the United States.”

The award Odom accepted on behalf of Suffolk Sister Cities was given for a program it did last year with Italian Edoardo Miotto, who is from Oderzo, one of Suffolk’s sister cities.

Miotto, who hopes to go into health care, came to Suffolk a few years ago on the youth exchange that the organization does regularly. He has since started university and wants to be a physician, so he came to Suffolk last year, lived with host families and spent the summer shadowing different physicians — something not allowed for those without medical degrees in Italy.

However, Miotto also visited the Western Tidewater Free Clinic and the Bon Secours Care-A-Van, both projects that have been funded by the Obici Healthcare Foundation, also named after Obici and established through his generosity.