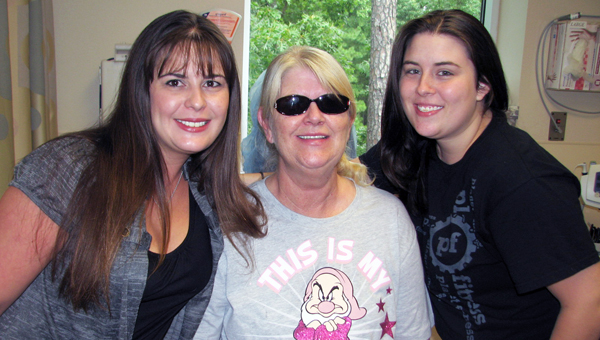 Jaimee Goodrich, left, and Brittany Goodrich stand with their mother, Cheryl Goodrich, just before her cataract surgery. Goodrich was one of 50 people chosen by Virginia Eye Consultants for free surgeries to celebrate the business’s 50th anniversary. (Tracy Agnew/Suffolk News-Herald)

Cheryl Goodrich has been legally blind from a cataract for more than a year, and it was affecting every aspect of her life.

She was having trouble driving from her Suffolk home to her job at the Southern Food Store in Smithfield. She couldn’t see the numbers on the register at work. Her daughters, Jaimee and Brittany, worried about her.

“We were afraid with her driving, that something was going to happen, because she can’t see,” Jaimee Goodrich said.

But all that has changed now. Goodrich was one of 50 people chosen to receive free eye surgery from Norfolk’s Virginia Eye Consultants to celebrate the company’s 50th anniversary.

“This day is just like a dream,” Cheryl Goodrich said while awaiting her surgery on Thursday. “I’m going to see again.”

Her daughters are still worried, though.

“I’m more worried what she’s going to think seeing everybody without cataracts for the first time,” Jaimee joked.

Goodrich and the other recipients were among more than 250 names submitted after a publicity campaign to gather nominations. A selection committee of community leaders who have helped shape Virginia Eye Consultants throughout the years — including the founder’s wife — made the difficult choices.

“We wanted to do something special for the community that has supported us for the last 50 years,” CEO Karen Spencer said. “We decided we’re going to do 50 surgeries for our 50th year, at no cost to the patient. We’re not getting reimbursed by any entity for anything we’re doing. It’s just our way of giving back to the community.”

As Goodrich was being prepared for her surgery Thursday morning, Windsor resident James Froman Sr. was being wheeled out of his procedure.

“It’s going to improve a lot, because this has been going on for 15 years,” said Froman, who is involved in a parrot rescue and has a parrot tattooed on his left arm.

Froman worked for Kirk Lumber for 28 years until he got laid off.

“We didn’t have insurance after that,” his wife Barbara Froman said. “Within the last year, he can’t see anything out of that eye.”

The cataract prevented Froman from seeking another full-time job, although both he and Barbara work part-time. He suffered from headaches and neck pain and couldn’t even leave the house in the morning.

“The light hurts it,” his wife said. “He’d have to go back in the house, and we couldn’t go until later.”

When Froman realized he couldn’t see the parrots when they sat on his left shoulder, he knew he was in trouble. But then his wife heard about the “50 for 50” on radio station Eagle 97.

“We’re tickled to death,” Barbara Froman said. “I think he’s going to be shocked at the change he’ll have.”

Dr. Stephen Scoper did many of Thursday’s procedures, which constituted roughly half of the 50 free surgeries.

“I love to do cataract surgery,” he said. “I feel so fortunate to have a skill that makes a difference in people’s lives.”

“There’s a huge cadre of working poor in our community who desperately need eye care to continue working, take care of their families and to survive,” he said. “I was reminded of how important it is to have reasonable, functional vision to live life to the fullest and to be gainfully employed.”

King’s Fork High School graduate Fletcher Stephens, selected as a finalist in the Peace First Prize, shows off his Be... read more