After a quieter Week One performance, Nansemond-Suffolk Academy junior fullback David Gough put up numbers against Christchurch School last week that Saints fans have come to expect from him. Fourteen carries for 112 yards, along with three touchdowns and a two-point conversion led to a nomination and 142 votes to clinch the title of Duke Automotive-Suffolk News-Herald Player of the Week. 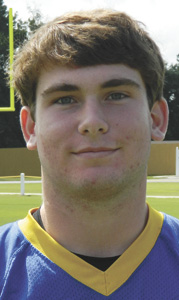 While junior halfback Addison Peak racked up 129 yards and two touchdowns in Week One, it is still a measure of a player’s dominance that Gough’s 11-carry, 63-yard, 1-touchdown performance could be considered subdued.

NSA head coach Lew Johnston is fond of saying teams cannot prepare for both the outside running attack and Gough’s inside attack.

“So teams choose, I guess, and it was a good game for me this week, and last week, you saw Addison’s stuff,” Gough said.

Johnston had some instructions for Gough, he recalled: “’I want you to attack defenders and make them pay if they come up and try to tackle that 230-pound body,’ and he’s not just a big kid, he’s extremely strong.”

“I felt like this past week he just ran, as I said, with more authority a more aggressive style against Christchurch,” Johnston said.

Gough set quite a standard last year when he saw his first extended time at fullback in his career. He racked up 1,157 yards, 15 touchdowns and several two-point conversions on 181 carries. He was named to the All State first team on offense and on defense as a tackle.

Describing how Gough has grown since last year, Johnston said he has made “tremendous strides. As good as he was last year, the guy could have rested on his laurels.”

Yet, Johnston said, in 25 years of head coaching football, he cannot think of anyone who has worked as hard to improve himself in the off season.

Gough’s father, Jeff Gough, said, “David and I started talking as soon as it was over last year not to make it a one-time deal, and the way you do that is by hard work. So he definitely put the time in.”

“I think that just speaks volumes of the kind of kid David Gough is,” Johnston said.

Jeff Gough said he loves to watch his son play and excel on the gridiron, but he said, “I think that work ethic, whether it translates on the field or in the classroom, is probably the greatest accomplishment and probably the best thing I like watching.”

His work on the field is evidenced this season by increased recognition from opposing teams.

“There’s more keying,” Gough said. “I hear my number called out by defenses, but last year it happened too. But Addison gets called (too). It’s not just (me); we have lots of threats in the backfield.”

Due to a season-ending ACL injury sustained by junior wingback/linebacker Jack Russell, Gough has had to transition on defense to a position he had never played before.

“At linebacker, you’ve got to be ready for anything,” Gough said. “Cole (Christiansen) is a great teacher. Talking to Jack, he’s a great teacher, too, and he tells me what I need to know, and so week-by-week, I just try to get more experience, get better at it.”

“He’s a humble kid, and I don’t think he really knows right now how good he really is,” he said. “It’s refreshing.

Gough said he thinks about colleges, has heard of couple interested in him, but has not made any decisions yet.

Right now, he’s focused on trying to get another 1,000-yard season, but mainly this: “I definitely think we should make it back to the state championship.”