Planning for the unthinkable 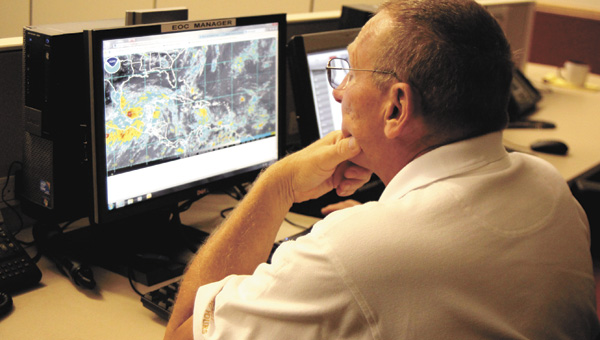 Jim Judkins, its emergency management coordinator, inside the city of Suffolk’s emergency operations center. With the threat of hurricanes yet to pass this season, and other disasters always possible, he urges families to plan ahead.

The worst danger period for hurricanes in Hampton Roads may have ended Tuesday with barely a creaking bough, but that doesn’t we should breathe a sigh of relief, Suffolk’s emergency management coordinator says.

Storm systems in the Atlantic and Caribbean currently pose no threat to the mainland U.S., Judkins said, but they’re an indication “it’s still active out there.”

Though top of mind this time of year, hurricanes aren’t the only potential disasters citizens should prepare for, the American Red Cross, Eastern Virginia Region and Dominion Virginia Power stated in a joint news release on National Preparedness Month — September.

In the release, Virginia Lt. Gov. Bill Bolling urged all Virginians to take the time to assemble household emergency plans and emergency kits.

A good way to start is by downloading the Red Cross free mobile app that provides information on disaster preparedness, Bolling said.

“Preparedness can make a critical difference in the outcome of emergency situations,” he said. “Do not delay in taking steps to better protect yourself and your loved ones.”

The city of Suffolk last put to use its emergency operations center at Fire and Rescue’s King’s Fork headquarters during 2011’s Hurricane Irene, Judkins said.

During such emergencies, the center allows the city to curate and disseminate information to help keep the public safe.

For officials like Judkins, complacency is a common enemy. “There’s a generation of people (in Suffolk) that really have no experience of a hurricane, unless they came here from a different area with more hurricanes,” he said.

The city also prepares for other types of disasters, including earthquakes and terrorist attacks, but hurricanes still pose the greatest local risk, he said.

Judkins said flooding is the biggest risk to Suffolk associated with hurricanes, and he advised citizens to learn their own flood risk.

“Regardless of where you live in the city, you need to be aware what flooding conditions prevail in that area,” he said, adding his office can provide that information.

Household emergency plans — he referred to them as family communication plans — should consider the structural strength of the home, where the nearest public shelter is, and family or friends that can be called upon, Judkins said.

“It’s a working document at least reviewed once a year, or every time of implementation,” he said.

More information on emergency plans and kits can be found at www.dom.com and www.redcross.com.