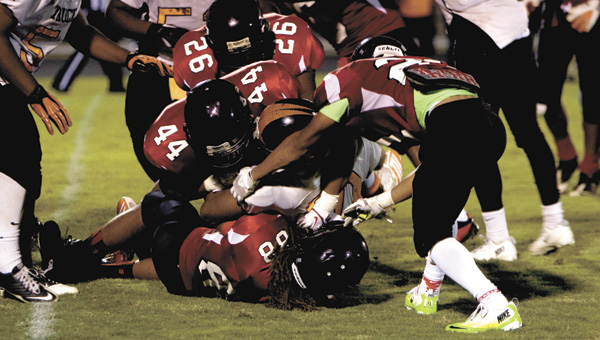 Senior defensive end Andre Butler (88) and sophomore linebacker Joshua Bush (44) sandwich a Churchland High School runner on Friday night. The Warriors defense was effective much of the time, but allowed a couple big plays, aiding in a 27-8 home loss.

Nansemond River High School’s first offensive series helped set the tone for the game on Friday night. The Warriors fumbled the ball inside their own 10-yard line, and Churchland High School recovered and scored shortly thereafter, taking a 7-0 lead two minutes in.

When a turnover was not the cause of the Warriors’ problems, a big play by the Truckers was, leading to Nansemond River’s 27-8 loss at Arrowhead Stadium.

“There were quite a few missed opportunities in the first half,” Warriors head coach Tracey Parker said.

One of the first followed a 20-yard run by junior running back DeShon Saunders, which put Nansemond River at its own 40. After a small advance from there, junior quarterback Jermaal Wells attempted a long pass into Churchland territory. The intended receiver could not catch it, but tried extending his opportunity by kicking it into the air, and the nearby Truckers defender caught it.

However, the Warriors’ defense was frequently effective at stopping Churchland, and the visitors had a net gain of only two yards on the ensuing possession.

Then, Nansemond River only gained two yards itself, but a roughing the kicker call during the punt breathed new life into the drive. After advancing to the Truckers’ 18-yard line, the Warriors turned the ball over on downs following a missed field goal attempt.

One of Parker’s points of emphasis in both games this season has been not giving up the big play, but his team did so twice for scores on Friday, including on the next drive through a 74-yard catch-and-run.

Costly fumbles were a theme of the game for the home team.

“We’ve just got to be better caretakers of the football,” Parker said.

Midway through the second quarter, hard running got Nansemond River to about the 50, and sophomore Joshua Covington’s 5-yard run on a fake punt kept the drive alive. Impressive running by senior running back Latrell “Vegas” Sandifer and fantastic blocking put the Warriors at the Truckers 21-yard line; then a fumble ended the effort.

Trailing 14-0 entering the second half, the Warriors seemed to gain momentum when Jermaal Wells came up with an interception, but a later Sandifer fumble was returned about 65 yards for a touchdown.

Churchland’s final score came with 3:35 left in the third off a 60-yard quarterback run.

Nansemond River was missing several players due to injury, including star senior linebacker Marvin Branch, who was out with a hurt wrist. Parker said they hope to have him back on Friday.

He acknowledged the player absences, but said, “We’re not going to make excuses,” pointing to the team’s “next man up” mentality, which beckons every player on the depth chart to be a standout when his number is called.

With Wells taking over behind center, DeShon Saunders was called on frequently to run the ball, and his 50-yard dash up the middle near the end of the third quarter finally got the Warriors on the board. Sandifer ran the two-point conversion.

Key passes from Wells to Sandifer and Covington fueled respective drives in the fourth quarter, but an interception in the end zone undid the first and a fumble lost stalled the second.

Turnovers aside, Parker felt better about the second half: “I feel like I saw some improvement.” On offense, he said, “We were moving the ball consistently.”

Despite its 0-2 start, the Warriors remain in playoff contention, largely because of the league’s realignment of conferences and divisions.

Parker said it is good to be your best in September, but “it’s even better to be playing your best football in October and November.”