Nansemond River High School clashed with King’s Fork High School on the field hockey pitch Monday evening, and the Lady Warriors established their offense in the first half to emerge with a 3-1 victory.

“Overall, I thought the girls played really well,” Nansemond River head coach Ali Mowry said. “They came out prepared for that conference game. We were moving the ball well, passing well and finishing on some of the corners.” 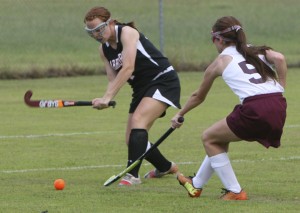 Sophomore midfielder Jaclyn Mounie scored two goals, including the first one of the game with 17:46 left in the first half. Senior forward Amber Daubenspeck got one in with 47 seconds remaining before halftime.

Mounie added her second score at the 14:05 mark in the second half, and all three Nansemond River goals were assisted by sophomore midfielder/back KateLynn Hodgkiss.

Of Hodgkiss, Mowry said, “Her initial shots are going right back post right now, and that’s where (Jaclyn) found herself on two of the goals.”

Hodgkiss is actually a defender, but Mowry said she puts her in a shooting position on offensive corners.

The coach praised her sophomore midfielder Claire Janek, who she said “really controlled the ball on the field for me,” working as a facilitator, and helping the Lady Warriors improve an area of past weakness.

The Lady Warriors were coming off a dramatic 1-0 win over Oscar Smith High School the week before that went to strokes. Senior forward Kimberly Bates, senior back Madison Janek and sophomore forward/midfielder Ashley Hiltabrand scored in the shootout, finishing one better than the Lady Tigers, but Mowry was not entirely pleased with the game.

She said her team controlled the ball 90 percent of the time, but it was not making smart passes and working the ball up the field together.

In the King’s Fork game, Mowry said, “I think we were definitely passing the ball a lot better.”

She said against weaker opponents, her players tend to think they can go right through the defense, a strategy that ends up crowding the circle in front of the goal.

Mowry was happy to see the Lady Warriors spread out the Lady Bulldogs’ defense.

King’s Fork has earned Nansemond River’s respect, as Mowry cited recent games against them having gone to overtime.

“They knew going into that game against King’s Fork that we weren’t taking them lightly,” she said.

They did give up a goal late, however. The Lady Bulldogs got on the board in the final two minutes of the game when junior Randi Fiel scored.

Mowry said, “Once we’re ahead, we’ve got to learn to focus better, no matter what the score is.”