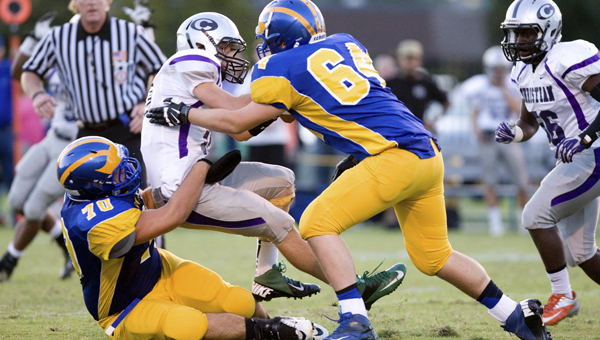 With few exceptions on Saturday evening, it was a great night for Nansemond-Suffolk Academy football fans. The Saints’ Delaware Wing T offense functioned like a well-oiled machine early and NSA’s defense was stellar, culminating in a 51-6 home win over Norfolk Christian High School.

The first quarter alone was a great illustration of Nansemond-Suffolk’s dominance.

The Saints started out the game with good field position at the Ambassadors’ 42-yard line. Then, they used four plays to march down and score off a 4-yard run by senior split end/defensive back Michael Tyler Lepore. Junior fullback David Gough followed it up with a 3-yard run for the 2-point conversion, the first of many points he scored on the night.

“I was pleased,” NSA head coach Lew Johnston said. “We played as well on offense as I’ve seen us (do) in a couple years.”

Next, the Saints’ defense went to work. For the game, it limited the Ambassadors to 117 yards, -29 yards rushing. On Norfolk Christian’s opening drive, it allowed only three plays for -5 yards and ended the drive by recovering a fumble.

Gough scored on the next play, a 30-yard run followed by a 2-point conversion run from senior offensive/defensive tackle Lee Willis to make it 16-0.

The Ambassadors gained one yard on their next possession before punting. Then the Saints used five plays to move 34 yards, including an 18-yard touchdown pass from senior quarterback Jackson DeMello to senior tight end /defensive end John Mobley.

With the extra point from sophomore kicker Ben Anderson, NSA had taken a 23-0 lead and the game was not even eight minutes old.

“Quite frankly, we were executing so well, it was kind of picking and choosing in terms of where we wanted to attack them,” Johnston said.

Gough expected to have a quieter night since Norfolk Christian clogged the middle last year. However, his versatility ended up making him the leading rusher in Saturday’s game, with nine carries for 87 yards and three touchdowns.

“This year was a lot more fun,” Gough said.

The Ambassadors did a good job of preventing his usual gains straight up the middle, so instead he ran slightly to the outside, following Mobley who blocked the defensive tackle.

Norfolk Christian had a trio of sizable linemen, but Gough praised the Saints’ line, saying it “played great against the three behemoths in the middle.”

Johnston agreed, saying, “We’ve gotten much stronger. Our kids were able to take them on and control the line of scrimmage, which is what we want to do every week.”

NSA racked up 313 yards of total offense with 255 of them on the ground. Aside from Gough, three other players rushed for at least 38 yards, including Addison Peak and sophomore running backs/defensive backs Noah Giles and Reed Browne. Lepore scored on two runs and Giles on one.

On the defensive side, sophomore linebacker Cole Christiansen and junior defensive ends Jack Johnson and CJ Patterson each had two assisted tackles for losses.

The major exception to the great night for NSA was the ejection of first team all-state senior center William DeLuca in the second quarter for unnecessary roughness.

Johnston spoke to the behavior football players must have on the field, saying, “It’s got to be controlled aggression; you just can’t go over that line. Unfortunately, William did and now he and the rest of the team have got to suffer the consequences.”

Per Virginia Independent Schools Athletic Association rules, he will have to sit out this Friday’s major test against Bishop Sullivan Catholic High School.

The center is key because he is the captain of the line, reading the defense and assigning responsibilities to his fellow lineman to ensure success of the offensive play. He and the quarterback must also be on the same page, which comes through consistent practice.

“We’ll just get a lot of reps this week at practice,” DeMello said on Saturday, referring at the time to himself and senior center Reece Walton. But Johnston has since decided to go with junior Camden Sutton, who has more experience on the line.