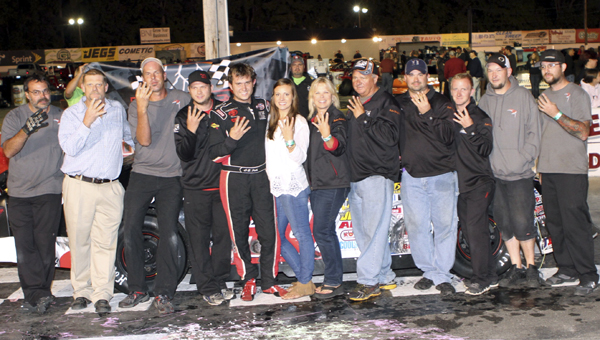 Greg Edwards surged into the lead on lap 96 and cruised to his third victory in the Late Model Stock Cars class, the featured event of Saturday’s NASCAR Whelen All-American Series program at Langley Speedway.

C.E. Falk, however, cruised to another track championship.

Matt Waltz started on the pole, at 90.723 mph, but soon gave way to Nick Smith. Coming around to complete lap 5, Smith bobbled a bit off Turn 4, and Waltz rallied, swiping the top spot on lap six. Waltz showed the way for laps 6-95, while Smith and Edwards dueled for the runner-up spot in his mirror.

On the restart following the third caution flag, at lap 96, Smith opted to launch from the outside lane, alongside the leader. Smith and Waltz went door-to-door until they reached Turn 4. Preparing to exit the corner, they scuffled and skittered up the track, opening the low groove for Edwards, who roared past.

As Waltz and Smith gathered their machines, Edwards pulled away by five car-lengths. During the closing circuits, Waltz was only able to trim a couple of lengths from the leader’s advantage as Edwards motored to the win.

Casey Wyatt was third to the line, while Smith and Dean Shiflett rounded out the top five. C.E. Falk was sixth in the 2013 Late Model finale, but the points he amassed during the season helped him claim his fourth track championship anyway.

The race concluded the regular-season events at Langley for the Late Model Stock Cars class. Two other regular events remain, which feature the support divisions. The $5,000 100-Lap Modified Madness will be run Oct. 5.