The King’s Fork High School girls’ volleyball team played host to Nansemond River High School on Tuesday, but the Lady Bulldogs did not play up to their coach’s expectations for them this season.

The Lady Warriors started the match by delivering a first-game blowout. The Lady Bulldogs at least made subsequent games closer, but still lost in straight sets: 5-25, 18-25, 20-25. 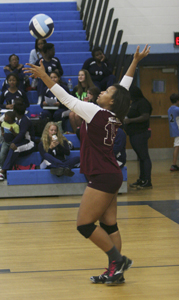 King’s Fork High School junior outside hitter Taylor Harrell serves at a recent game this season for the Lady Bulldogs. Head coach Sarah Porter has appreciated Harrell taking a leadership role this season to help elevate the program’s success from 2012.

“We definitely didn’t play at our best,” King’s Fork head coach Sarah Porter said. “We can do a whole lot better than what we did. They took us out of our game.”

She added, “We didn’t even give Nansemond an opportunity to show us their best,” because all they had to do to win was capitalize on King’s Fork’s mistakes.

After coaching a 2012 Lady Bulldogs squad that went 7-17 overall and 4-14 in the Southeastern District, Porter has a clear expectation for 2013, which is “for us to do better overall than what we did last year,” she said.

King’s Fork saw five players graduate this past summer, including four starters, but Porter is still confident improvement can happen.

The team currently features four seniors, three juniors, three sophomores and one freshman, and the group is already 4-7 overall, 1-1 in the conference.

“I guess my other expectation is to be a more competitive team, regardless of our opponent,” Porter said, referring to consistency, which will hopefully result in more wins.

One thing boosting Porter’s confidence is the Virginia High School League’s realignment, which makes King’s Fork’s path to and potentially through the post-season one involving only schools of like size.

“I feel like playing schools that are similar to what we have makes the playing field more even, and we’ll have games that are more competitive,” she said.

Her goal for the year is to have a conference record above .500.

Among the players she expects to lead the charge are senior setter Erin Banks and junior outside hitter Taylor Harrell.

Banks and Harrell have ambitious goals for the team this year, and some personal goals they aim to achieve in order to help the team.

“I want to become a stronger setter and a stronger right-side hitter and maybe become ambidextrous,” Banks said, while Harrell said she wants “to become a smarter and more strategic hitter.”

She has come to the area from Florida, and Porter said, “Despite being new to the team, she’s taken a leadership role.”

Sophomore middle hitter LaTonia Thomas has become the Lady Bulldogs’ most effective offensive threat, averaging the most kills and the most blocks on the team.

Her success is impressive, because she is shorter than a typical middle player, and this is her first year on the varsity squad. She played junior varsity last year as an outside hitter, but Porter said, “She’s really stepped up and taken a starting position in the middle.”

The coach said she feels good about her bench players, particularly up-and-coming freshman setter Cydney Nichols. She is being trained to take over the setter position next year for Banks, but Porter said, “She’s just an athletic player, and I can put her pretty much anywhere on the court.”

She said, “In the years to come, I’m looking forward to seeing her grow as a player.”

Porter said her team’s biggest obstacle will be itself, allowing other teams to make big runs and getting frustrated. She said the key will be for her girls to focus on doing things right on their side of the net and not getting distracted by what they cannot control on the other side.