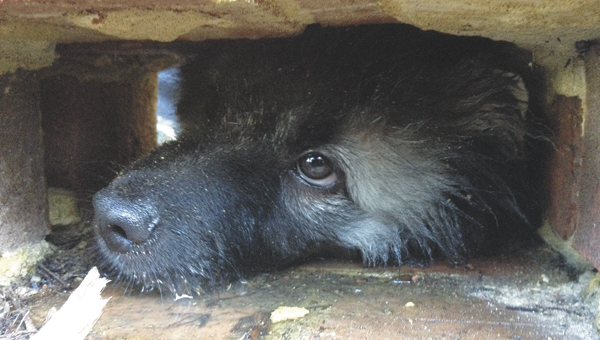 This dog was stuck in a wall before he was rescued by the Carrollton Volunteer Fire Department on Sunday.

One Carrollton dog’s illicit escape route from his patio became a problem for him — and the Carrollton Volunteer Fire Department — when he got his head stuck in a drainage hole on Sunday.

The pup had often escaped from the patio at the Eagle Harbor Apartments via that route, the owner explained to firefighters. But the pooch, unbeknownst to him, had outgrown the drainage hole. 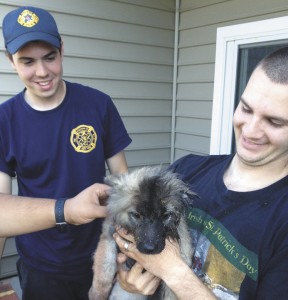 Carrollton volunteer firefighters Mason Halsey and Tyler Newton show off the pooch they freed from a drainage hole in a patio wall at the Eagle Harbor Apartments on Sunday.

The first attempt to free the dog — undertaken by the owners before they called the fire department — had involved pouring cooking oil on the dog to try to loosen him up, Capt. Brian Hubbard of the volunteer fire department said.

Seeing that hadn’t worked, the volunteers tried to come up with other solutions.

“We tried some other stuff,” Hubbard said. “We didn’t really want to damage the wall if we could help it. We tried to manipulate him out, and that wasn’t working.”

The frightened dog fought back against those trying to help him, Hubbard said, so they went with the next best option. Volunteers Mason Halsey and Tyler Newton used hammers and chisels to chip away at the masonry, and the dog was freed after about 40 minutes of careful work, Hubbard said.

“If chipping the brick didn’t work, we were going to try to sedate the dog so it wouldn’t try to wrestle us,” Hubbard said.

Fortunately, it didn’t come to that. The dog was unharmed and handed back to the owners.

“I guess they’ve got to have the wall fixed,” Hubbard said.