‘We have big dreams to win big games’

The look of a state championship contender has begun to emerge in the Lakeland High School field hockey team, and Western Branch High School was the victim of its progression on Wednesday.

The Lady Cavaliers scored twice in the first minute of the game and were up by eight goals at halftime on their way to a 9-0 mercy rule-shortened victory at the U.S. Field Hockey National Training Center in Virginia Beach. 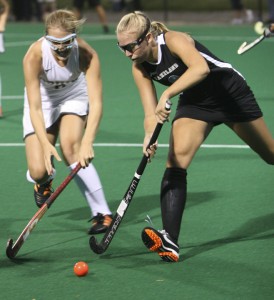 “I definitely think that we came out stronger as a team than we have in previous games,” senior forward Kiersten King said. “We’ve been working really, really hard to progress, because we have big dreams to win big games.”

Highlighting what made the difference against the Lady Bruins, Lakeland head coach Tara Worley pointed to fundamentals and effort.

On Monday against Hickory High School, the Lady Cavs elevated their play to a new level this season after briefly trailing for the first time in 2013.

“I feel like we are on the right track and we picked up where we left off on Monday, and actually, (were) even better tonight, I think,” Worley said.

While Lakeland’s new all-time leading goal-scorer Summer Parker has been prolific this season, the Lady Cavs’ first six goals were scored by a variety of other players.

The next two goals came from Cox and King on assists from Parker.

“They were marking Summer pretty tight in the circle, so Summer had to give up the ball, and Summer was finding the right person,” Worley said.

Parker elaborated, saying she pulled out of the circle, opening it up “for Kiersten and Jessie, and that’s how I assisted their (goals).”

Senior back Kasey Smith scored next off a penalty stroke, and then King added her second goal of the game, unassisted.

If Lakeland fans thought for a moment they would not get to see Parker add to her record goal total on Wednesday, those concerns were erased as she scored her team’s final three goals. They came off assists from senior midfielders Jamee Albright, Kristen Vick and senior forward/midfielder Alexis Albright.

While Worley has refrained from listing standouts in recent games because she was disappointed with her team’s performance, she had difficulty listing stars on Wednesday because there were so many.

“Everybody played a role tonight,” she said. “We worked the ball around the entire field and that means it touches almost everybody. It causes everybody to have to move and be in the right place, which is what we worked on in practice yesterday, and they executed it very well today.”

King said, “We were kind of reading each other’s movements to score the goals that we did and make the score run up as quick as we did.”

Lakeland’s facility on turf was on full display as they strung together passes smoothly from player to player. But Cox made it clear the Lady Cavaliers aim to minimize the degree to which a playing surface affects their performance.

“Playing on the turf helps, but it shouldn’t be a reason to play better,” she said. “You should play just as good on grass as you do on turf.”

Notably presence in the crowd was former Lakeland principal Dr. Thomas Whitley. Though he is now principal at Western Branch, he continued to show appreciation for his old students, sharing an embrace after the game with the Albright twins.