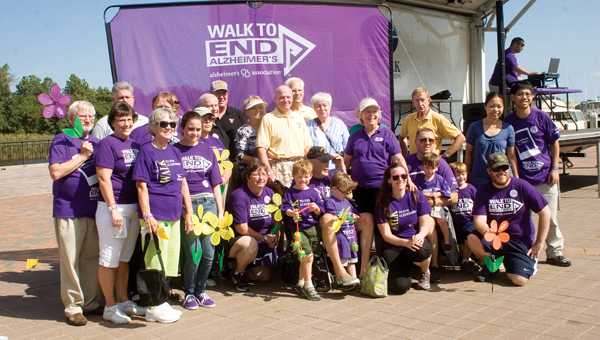 Members of the Suffolk Exchange Club pose for photos in front of the Alzheimer’s Association banner at the Walk to End Alzheimer’s on Saturday at Constant’s Wharf Park. The club was the second-place fundraiser, coming in behind Smithfield Foods’ walkers. (R.E. Spears III/Suffolk News-Herald)

Some were there in memory of friends and family members who had succumbed to the disease. Some were there as caretakers of people currently afflicted with it. Some came as advocates in support of research to find a cure.

And a few participants at Saturday’s Walk to End Alzheimer’s in downtown Suffolk were people suffering from the disease.

More than 300 walkers and a slew of volunteers turned out for the event under warm, sunny skies at Constant’s Wharf Park Saturday morning. They brought more than $6,000 in pledges with them, bringing the Southeastern Virginia Chapter of the Alzheimer’s Association within a few thousand dollars of its goal for the Western Tidewater walk.

Participants had reported nearly $38,000 in donations by Saturday morning, and President Gino V. Colombara said they have until Nov. 30 to continue raising funds, encouraging them from the Constant’s Wharf stage to continue doing so to help meet the organization’s $47,500 goal.

“I know we’ll reach it,” he said in an interview earlier in the day.

The funds raised in the various Hampton Roads-area walks help the Alzheimer’s Association provide a variety of services to families of people suffering from the disease, he said.

“I’m energized, I’m inspired and I see hope on the horizon,” Colombara said as the walkers completed one- and three-mile circuits of the downtown area, with police periodically stopping traffic for them and platoons of purple-shirted volunteers showing them the way.

Prior to the walk, as the opening ceremonies took place, those flowers were stuck in the grass of the hill between the Hilton Garden Inn and Constant’s Wharf, making a visual statement about the level of support on hand for the effort.

“What we want to do is really put a face on the disease,” Colombara said, citing statistics that he interprets as “a tsunami waiting to happen.”

More than five million people in the United States — including 30,000 in Southeast Virginia — live with Alzheimer’s, he said, and those numbers are expected to triple by 2050, as the American population ages, according to the Alzheimer’s Association website.

Colombara said treatment of the disease — for which there is still no known cure — will cost America $203 billion in 2013, and that number is expected to rise to $1.2 trillion by 2050.

But beneath all of those figures are many personal stories of people who feel afraid and alone as they and their loved ones face the disease, and Colombara understands their plight.

In 1986, after father was diagnosed with the disease, Colombara began caring for him. Six months later, he was volunteering with the organization, and after his father died in 1993, he agreed to serve as short, trial term as the president and CEO of the local chapter. It’s a position he has held ever since.

As a former caregiver and a person whose life was changed by a loved one’s Alzheimer’s diagnosis, he said, “I want to let people know they’re not alone.”

On Saturday, with pinwheel flowers spinning in the breeze and purple shirts all over town, the support system was evident to all who passed by.

For more information about Alzheimer’s disease or to find local resources to help following a diagnosis, call 1-800-272-3900.