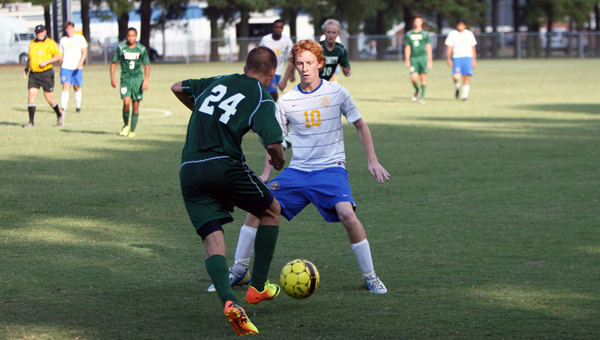 Nansemond-Suffolk Academy sophomore midfielder Patrick Crossman looks to close off the path of a Trinity Episcopal School player on Friday. The Saints lost 3-2 at home, but showed the possibility of good things to come in the back half of the season by scoring their first goals of the year. (Titus Mohler/Suffolk News-Herald)

The visiting Trinity Episcopal School boys’ soccer team was up 2-0 on Friday when Nansemond-Suffolk Academy crashed through a wall that had been up all season thus far.

Saints senior midfielder John Hogan launched a shot that found the back of the Titans’ net, giving NSA its first goal of the year. Then, about midway through the second half, senior forward Zach Ward tied the game.

A Titans penalty kick in the waning moments got past diving senior goalkeeper Thomas King, to decide the game, but it did not change what the Saints got out of the contest.

“I think today was the turning point of the season,” junior defender Cole Jackson said.

King said, “I don’t expect to win every game, but today was definitely the best I’ve seen from us in terms of playing to win, instead of playing defensively, expecting to lose.”

On Saturday, NSA head coach Patrick Whelan said, “I was so proud of our team yesterday. We didn’t stop playing hard for the full 80 minutes.”

Despite the Saints’ 0-3 conference record, the coach said the games have been competitive, and “now that we’re hopefully starting to find the back of the net, we’ll be a force to be reckoned with for the remainder of the season.”

The Saints graduated three seniors from last year’s team. They still have four this year, but feature a 21-man roster with 11 underclassmen.

For leadership of this young group, Whelan looks to a natural source – the team captains.

“Zach Ward, John Hogan and Thomas King are three of the most exceptional young men you’ll ever come across,” he said.

He said their work ethic, attitude and demeanor in games, at practice and school is outstanding.

On the field, Ward is an attacking center midfielder, and Whelan praised his speed as one of the team’s biggest weapons.

Hogan, the defensive center midfielder, brings physicality, an ability to win 50-50 balls and hit the long pass among other things to bolster the Saints.

Then, Whelan highlighted the back of the defense, saying, “The toughest position in all of the sports is the goalie, and Thomas King is world class,” sacrificing his body to stop shots, and offering clear communication to his defense.

The trio serves as strong examples for other key contributors like junior defenders Cole Jackson, Taylor Bridgeman and Phillip Lanzafame.

Both Whelan and King named a lack of confidence as the major obstacle NSA will have overcome to close its season well.

King said, “I think the biggest challenge will be to get those underclassmen to the point where they’re confident and competing with older players, and they don’t turn away from the challenge of trying to make a move on somebody who’s older than them.”

For the final eight games of the regular season, Whelan said, “Realistically, our goals are to win a couple of these remaining games, to keep finding the back of the net every game.”

He hopes to make the Tidewater Conference of Independent Schools tournament and see the team ranked in the top 25.

The Saints will look to avenge a 1-0 conference loss from earlier in the season to Norfolk Christian High School when they travel to play the Ambassadors on Tuesday.