Liberty Spring Christian Church will hold a benefit dinner and other fundraisers this week for its former organist and music director and her family.

The problems for Emily and John Park started when he had heart bypass surgery and an aortic valve replacement on Nov. 27. Although he had no history of problems with his heart, tests done to follow up on a routine doctor visit showed three blockages and an aortic valve that was going bad, Emily Park said. 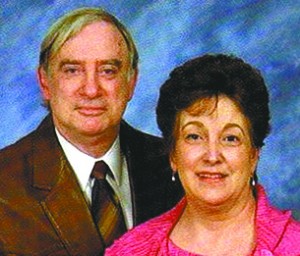 “He came out of surgery with flying colors,” she said. “It was after surgery everything just went down.”

The surgery went better than expected, she said. Surgeons found only one of the blockages was severe enough to require a bypass, and they did not have to harvest any blood vessels from his legs to use in his heart.

But despite a surgery that apparently went by the book, the problems never stopped for John Park afterward. He coded, went into respiratory arrest, had pneumonia, had seizures, got a septic infection, had organs shut down and more.

“If anything happened, it happened to John,” Emily Park said. Her husband did not finally come home from the hospital until the first week of February.

Now suffering from encephalopathy of the brain, John Park, age 71, is under hospice care.

“It’s been one horrible nightmare,” his 60-year-old wife said. “Hindsight is always better. If we had known … he’d have never gone through the surgery.”

The couple has been married 27 years and has three children between them, as well as two grandchildren.

“He’s always just been a good man,” Emily Park said, recalling how her husband would take off from work to work on the sound system at Liberty Spring Christian Church. “John has always been such a loving, giving person. He was there every Wednesday and Sunday to do that sound, and he never asked for any compensation.”

Barbecue dinner tickets are on sale for $8 each, and the meal will be served to eat-in or take-out customers. Desserts such as cakes, pies and cookies will be for sale, and a number of silent auction items are available.

Two quilts — a floral pattern and one titled “The Life of Christ” — will be raffled, with tickets going for $1 each.

All the events are happening from 4 to 7 p.m. Saturday. For more information, call the Liberty Spring Christian Church office at 986-4403.