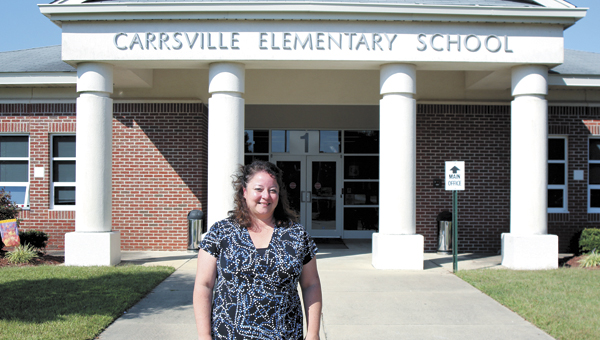 Laura Matthews is the principal of Carrsville Elementary School, named to the 2013 National Blue Ribbon Schools program, an honor bestowed on only 10 Virginia schools.

Carrsville Elementary School in Isle of Wight County was named to the prestigious 2013 National Blue Ribbon Schools program on Tuesday.

The program honors schools that are either academically superior or dramatically improving.

The school of about 250 students, a short drive from the Suffolk community of Holland, is one of 10 Virginia schools recognized this year.

It was the only public school from Hampton Roads or Western Tidewater named, sharing the honor with Saint Patrick Catholic School in Norfolk.

Principal Laura Matthews chalked the result up to the dedication of the faculty, staff, students and volunteers.

“They have all worked so hard — consistently, year after year — to make this happen,” she said.

The pre-K through fifth grade school is family-oriented, she said. “We have very supportive parents, and just hard-working students who do their best every day.”

In 2012, Carrsville Elementary successfully transitioned from a targeted assistance to Schoolwide Title I school, Matthews said.

She said this “opens the resources and opportunities for all of our students.”

Despite the surrounding rural community being economically challenged, the school has earned the Title I Distinguished School Award ever since becoming a Title I school in 2008, according to an Isle of Wight Public Schools news release.

All seven Virginia public schools that achieved the honor “maintained full state accreditation, despite a significant increase in the rigor of the commonwealth’s standards, assessments and accountability benchmarks,” state Superintendent of Public Instruction Patricia I. Wright stated.

She also noted all seven earned awards earlier this year through the Virginia Index of Performance program, Carrsville Elementary earning the Board of Education Distinguished Achievement Award.

School Board Chairman Robert Eley stated that the school is “located in an area of our county that has recently faced tough economic times — particularly with the closing of the International Paper Mill and cutbacks at other local employers.”

“I am very proud of the perseverance of all of the students, teachers and staff at Carrsville Elementary, because it is a shining example of how excellence can still be achieved when we all work together,” he added.

Matthews said she now has to decide who travels with her to Washington in November for a U.S. Department of Education conference and awards ceremony.

“We are working out the details as far as which staff members,” she said.

For its good work, the school received a flower bouquet Tuesday from Katrise Perera, district superintendent, and the School Board.

“We are all very proud of Carrsville Elementary for this outstanding accomplishment,” Perera stated in a news release.

“This award is a true testament to all of the hard work of our students and staff. It is a prime example that despite tough times and hardships, students can continue to excel when provided with the right educational resources.”