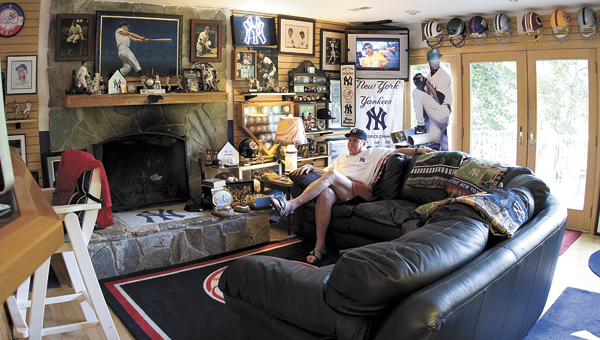 Above, Jim Rhodes sits on the couch of his “Yankee Room,” a two-car garage that he converted into a sports bar and New York Yankees shrine. Flat-screen televisions hang in every corner of the main room, along with the bathroom and a guest bedroom inside the former garage.

For 150 years, it has been America’s pastime.

For North Suffolk’s Jim Rhodes, it seems like more of a lifetime obsession.

Baseball has been woven into the fabric of Rhodes’ life since he was a boy in Richmond, riding his bicycle — with the Mickey Mantle trading card stuck in the spokes — to Parker Field to watch the Richmond, Virginians, the New York Yankees AAA farm team that he idolized almost as much as he loved the Yankees themselves.

“I’d spend my whole summer there,” he recalls. “I was the first kid in and the last one to leave. I could get a whole team to sign my program.” 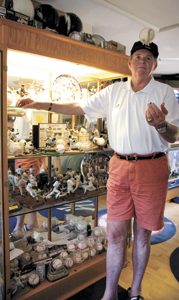 North Suffolk’s Jim Rhodes tosses a baseball while standing in front of a display case packed full of other balls, figurines, plates and other memorabilia — most of it signed — that honors and recalls his lifelong love of the New York Yankees. The memorabilia fills a converted two-car garage on Rhodes’ property and includes autographs from some of baseball’s legends, including Joe DiMaggio, Roger Maris, Mickey Mantle, Don Mattingly and more.

The Mickey Mantle trading cards might have been ruined by their use on Rhodes’ bicycles, but decades worth of signed Yankees memorabilia going all the way back to those signed programs more than makes up for the loss.

Every fan with a treasure trove of sports mementos has some special place to display them. Not many, though, have an entire building devoted to them.

Welcome to the Yankee Room.

At one time, back when Rhodes moved to his Suffolk home in 1996, the Yankee Room was a simple detached two-car garage.

But a friend in New York — another Yankees fan, of course — has a sports bar with Yankees memorabilia in his house, and Rhodes had an idea during a visit there.

From that idea was born the Yankee Room, a sort of shrine to America’s pastime that was a couple of years in the building, but a lifetime in the making.

“Baseball is just my escape from the real world,” say Rhodes, who is a Portsmouth dentist in that real world.

“To be able to come home to this — it’s kind of a release,” he says, looking around the room, where display cases hold baseballs and other memorabilia signed by some of the game’s greatest legends and where flat-screen televisions show live Major League Baseball broadcasts.

“Not everybody gets to do that, so I have been very fortunate.”

A painting of Roger Maris and another one of Don Mattingly have pride of place in the collection, as both were painted by Rhodes’ wife, Mary Lynn. The Mattingly painting even has the player’s signature.

Rhodes has a knack for being able to get players’ autographs.

“I was a polite kid,” he recalls. That character and an instinct for being in the right place at the right time meant he sometimes was able to get whole teams to sign his mementos.

The ’61 Yankees are his passion, Rhodes says, because his mother was from Brooklyn and he’d go to the stadium when he visited. 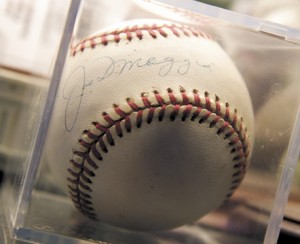 A baseball autographed by Joe DiMaggio.

“That’s who I grew up watching,” he says.

He has a more direct connection to the 1978 World Series Championship team, though, as he became close friends with the late Tony Ferrara and wears the former Yankees’ coach’s championship ring as a reminder of the friend who died in 2009.

Rhodes met Ferarra at a New York Yankees Fantasy Camp, where former Yankees players and coaches work with, coach and even play against teams of fans who pay handsomely to spend a week wearing Yankees uniforms, playing in Yankee stadium and rubbing shoulders with some of the sports’ legendary players.

“It’s a little grueling,” Rhodes admits, noting that participants — most in their 50s and 60s — play two nine-inning games a day for five days while gunning for a small championship plaque.

Rhodes has six of those plaques, and the teams he’s played on — which include a core of seven or eight men who have played together for most of his 11 years as a participant — have won 24 games straight in pursuit of the last three years worth of championships.

If escape from the real world is the heart of Rhodes’ love for baseball, the friendships with people like Ferrara and others nurtured through the Yankees fantasy camp are its soul.

Through the camp, he says, he met “four guys that are really my best friends now.” Even during the off season the friends keep in daily contact with each other.

And when time for fantasy camp rolls around again, he’ll be in New York to spend time with them and, probably, look for a few more autographs. But this year, he won’t be playing.