Church reaches out with community spirit

Forest Glen Middle School was looking good for orientation events earlier this month, thanks to the community spirit of volunteers from First Baptist Church.

Marty Terrell, its assistant pastor for student ministries, said the church was looking for “ways to partner with schools and serve our community,” when the opportunity for landscaping work at Forest Glen presented itself. 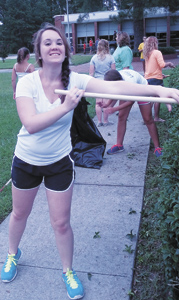 Volunteers from First Baptist Church got busy last month with landscaping work at Forest Glen Middle School as part of efforts to serve the community. The spruce-up made the school more attractive for orientation events.

“I contacted (Forest Glen principal) Mr. Bradshaw a while back,” Terrell said. “I just said, ‘We have students that would like to be involved in a service project. If there’s something we could do, we would love to come in and do that.’”

Melvin Bradshaw suggested the school could use a spruce-up for orientation events.

“He wanted the premises to be looking OK for that,” Terrell said. “We were excited to get out there and do a little bit of work to help them out.”

Five adults and about 15 student volunteers went to the school one day in late August, Terrell said.

Rolling up their sleeves, they trimmed bushes, collected pinecones and spread mulch in flowerbeds.

“We did some sweeping and also cut some grass — we brought a lawnmower,” Terrell added.

Bradshaw organized for the mulch, he said, while the volunteers also came armed with gardening implements.

“We were happy to be able to make the premises more attractive for the families that were coming there,” Terrell said.

“Hopefully it was a blessing for the school — I know it was such a good thing for us, as well.”

This year, he said, they will send cards with Chick-fil-A meal vouchers to educators at Forest Glen Middle School.

In an email, Bradshaw said the volunteers’ landscaping efforts “greatly assisted our school in getting ready for the beginning of the school year.”