Faith at the flagpole 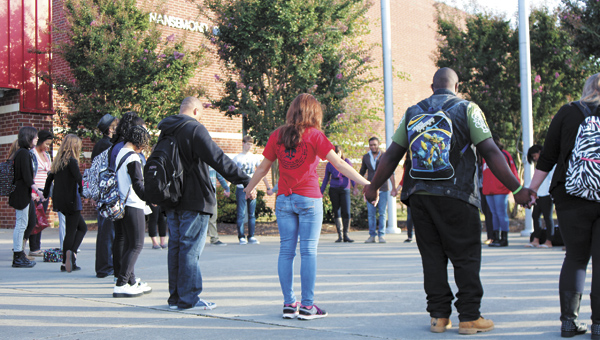 Nansemond River High students join hands in prayer during a See You at the Pole event outside the school Wednesday morning.

Christian students the world over gathered outside schools Wednesday to pray and praise God, including at Nansemond River High School.

The See You at the Pole event, organized by Trinity Torres, a Nansemond River High junior and member of Hampton’s Bethel Temple Assembly of God, drew about 35 students.

“This is way bigger” than in previous years, said Torres, as students not involved in the event walked past en route to class. “It was really spirit-filled. I felt God’s presence moving — it really brought us together as a unit.”

The global day of student prayer — as it is billed — began in 1990 when 10 students decided to pray for their school.

Now, 23 years later, millions pray on campuses on the fourth Wednesday of September, organizers say, in America sending the message that the First Amendment enshrines the right to pray at school in non-instructional time.

Event supporter Liberty Counsel advises organizers that asking school administrators’ permission is “courteous and may preclude confrontations on the day,” but not mandatory in order to pray at the pole.

The international nonprofit offers education and, “if necessary,” legal representation to protect students’ right to gather and pray.

“Revival preceded the American Revolution,” Liberty’s founder and chairman Mat Staver stated. “America was birthed in prayer. America will be sustained in prayer.”

Jatthan Foster, a junior, kicked off the Nansemond River High event by leading students in praise on his acoustic guitar.

Torres challenged the young Christians to carry their Bible wherever they go for 30 days.

“Sometimes it’s really easy to feel alone, like you are the only Christians,” she said.

Nansemond River sophomore Nia Johnson then led the students in prayer after they joined hands and formed a circle.

“I just want to encourage you guys to pray,” Johnson said. “You can pray every single day.”

“This is just an opportunity for students to stand up for their faith,” he said.