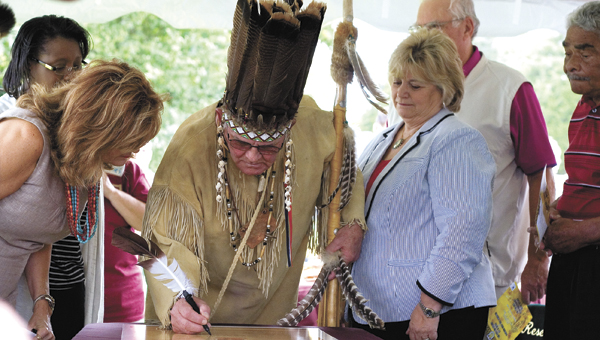 Surrounded by city officials, Nansemond Indian Tribe Chief Barry Bass signs a ceremonial document at the Aug. 17 powwow. Below, he unveils a monument to dedicate the land.

A step forward. A swoop of the pen. And just like that, the Nansemond Indian Tribe had its land back.

Except it didn’t happen just like that. European settlers forced the tribe off its land in the early 1600s, and the tribe didn’t start the process of trying to get it back until nearly 400 years later.

Once they started, there were planning meetings. City Council meetings. Unsuccessful votes, and more meetings.

Finally, the vote came. 7-1, but it was enough. The tribe had its ancestral land back.

Then came more meetings, lawyers, more votes. It was a long road to Aug. 17, 2013, when at the end of Pembroke Lane, under a tent, Chief Barry Bass stepped forward along with city leaders to sign his name to a ceremonial document. The actual deed had been recorded in the courthouse two days before.

Gifts were exchanged, here on this ground where hesitant contacts with European settlers resulted sometimes in gift exchanges, sometimes in death.

A monument was unveiled, here on this ground where the tribe’s ancestors once built their longhouses and kept gardens.

A celebratory powwow began, here on this ground where the tribe’s ancestors danced and drummed so long ago.

The mayor and the chief walked into the dance circle side by side, here on this ground where America’s long history of racial hostility began.

Soon the tribe hopes to change the land, which has been a city park for many years, into a development called Mattanock Town, named for its village that was near the site.

And the Nansemond Indian Tribe will once again have its own village.