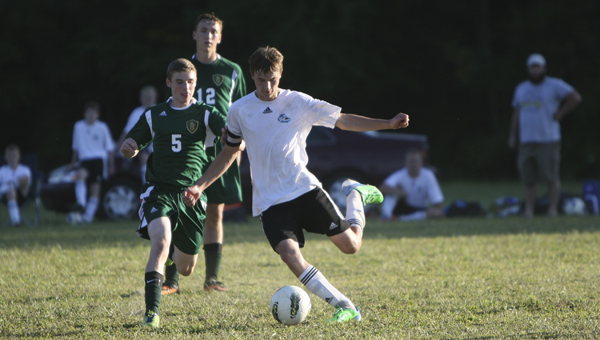 The Gateway Christian School boys’ soccer team led at halftime on Tuesday against host Suffolk Christian Academy, and the game held the possibility of ending like every other meeting between the two teams.

Despite trailing 1-0, the Knights pleased their coach with strong play in the first half, and the second half followed suit, but with more obvious results. The home team rattled off four unanswered goals to hand the Crusaders an unprecedented defeat.

“They played how I’ve been trying to teach them to play,” he said. “They were talking to each other. There was a whole lot less (selfishness), like somebody just taking a shot when it was ill-advised.” Instead, he said his players were passing, and he highlighted how the defense stepped up and was talking, as well.

Milner said Gateway won the conference last year and lost some seniors from that team, reducing their strength some, but the 4-1 win was still very satisfying.

After confirming it was Suffolk Christian’s first win over Gateway, Milner said, “That just makes it even better.”

He said his team played well throughout the game, though the Knights could not get on the board until the final 40 minutes of play.

“We may have worn them down a little bit,” Milner said. “They started to look a little tired, but our guys just kept pushing and kept pushing.”

Effler said Suffolk Christian was a little iffy in the first half, still getting warmed up. But he described the team’s mindset coming out of halftime down by one.

The Crusaders held the ball down near SCA’s goal early on, but then the Knights turned the tables and scored off a shot by junior forward Michael Cornette. He put up a hat trick on Monday in a 9-0 victory over visiting Chesapeake Bay Academy.

After his goal on Tuesday, momentum seemed to shift in the Knights’ favor as they threatened frequently on the offensive side.

Later, sophomore forward Zach Legg kicked a high arching shot that seemed likely to land on top of the goal, out of bounds. Instead, Gateway’s keeper watched as it landed on the goal line in the mouth of the goal. From there, it bounced off the bottom of the crossbar and into the goal for the go-ahead score.

Effler later added to the margin with a goal, and a penalty in the box by the Crusaders’ keeper gave the Knights a penalty kick. Senior midfielder Collin Dennys put it in the back of the net.

Effler also had two assists, and Dennys had one.

The Crusaders made forays into Knights territory late but gained little. Their best chance came in the waning minutes when the SCA keeper picked up a pass from a teammate, prompting an indirect free kick from within the goal box. Junior defender Nathan Leiter helped repel the attempt.

He commented on his team’s defense for the game, saying, “I feel like we kept them out of the box well. We pressured the ball whenever they kicked it to the side, and we sent it back up and as soon as we sent it, we kept on pushing up, keeping them off sides and trying to keep them out.”

The game marked Suffolk Christian’s first win in the conference, improving its record to 1-2.

“The difference between our first conference game against Summit (Christian Academy) and this game was just tremendous,” Milner said. The Knights lost to the Eagles 7-0.

According to MaxPreps.com, the Beach Breakers currently sit atop the Seven Cities Athletic Conference standings with a 4-0 record, but Effler indicated they should not get too comfortable.

“I am pumped right now, and I think we’ll win some more games,” he said. “I think Beach should watch out.”