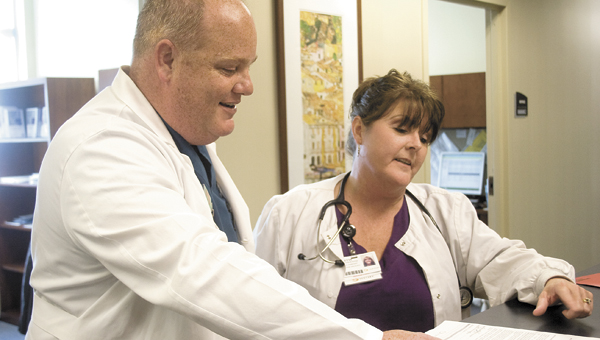 Dr. Brian King confers with Lynette Baranyai, a certified medical assistant, in his office at Sentara Obici Hospital. King, a New Jersey native, said he has embraced Suffolk and its small-town culture.

If Dr. Brian King weren’t saving lives at Suffolk’s Sentara Obici Hospital, there were any number of options available to him.

Sometimes he thinks he might have enjoyed a career in the classroom instead of an operating theater.

Back when the 46-year-old surgeon was attaining his undergraduate degree at the United States Naval Academy in Annapolis, Md., in the 1980s, he had thought he would become a pilot.

“(The) personality of a pilot is very similar to a surgeon,” King said. “Type-A.”

But then he was told his vision wasn’t up to scratch. 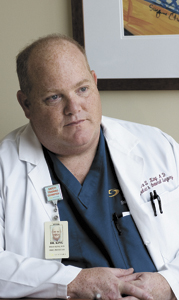 As his chemistry major progressed, “more and more” professors advised a career in medicine.

“That got me thinking,” King said.

His mother was an operating room nurse, and medicine — later surgery — seemed a good fit.

King graduated from Georgetown University with a medical degree in 1993 and has been practicing at Sentara Obici for five years. Serving there, he has found his niche, and he has made a real mark on healthcare in Suffolk.

“I like this hospital and practicing in this community, because this is small-town America,” he said.

King said he performs more breast surgeries than other surgeries — probably 15 each week. “I consider myself a breast surgeon,” he said.

October is National Breast Cancer Awareness Month, and King says he has seen awareness about the disease and its risk factors increase a lot over the years.

Where breast cancer and mammograms were rare topics of conversation 20 years ago, more women are talking about them these days, he said.

“People are getting more educated, and more information about it has become available,” he said. “(Now) it’s something many women are proud to talk about.”

“On the one hand, it’s great that the awareness is there,” King said. “But what we don’t want is people to think if they don’t have that gene, they can breathe a sigh of relief. Only 25 percent (of breast cancer cases) are related to that gene.”

Most women diagnosed with breast cancer are the first in their family to get it, King said.

“This is a widespread problem,” he said. “Twelve percent of all women will develop breast cancer. That’s a big number.”

The New Jersey native described theater-major wife Jackie King as “the Yin to my Yang.” They have four children together between the ages of 17 and 11, three boys and a girl.

“This is one of the fastest-growing cities in Virginia, and it’s a great time to be in medicine here,” Brian King said. “I like running into my patients in the grocery store.”

And as for that latent longing for the classroom, King, who has an affinity for math and science, has always admired how educators round characters and shape lives.

“If I could do anything I wanted, I would probably teach high school math, maybe high school science,” he said.

“When I look back, the teachers who had the most influence in my life, that is where they got me.”