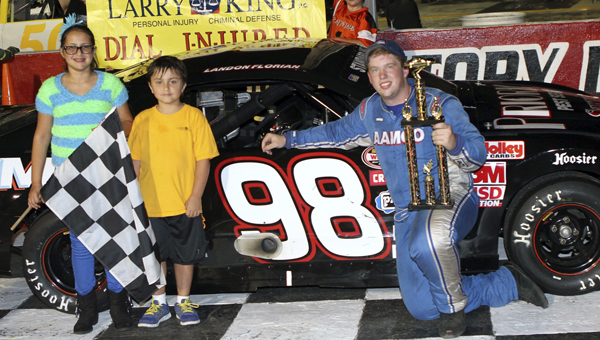 Jimmy Humblet started on the pole, at 88.565 mph, and wired the field for his eighth win of the season in the 50-lap feature of the Modifieds class at Saturday’s NASCAR Whelen All-American Series program at Langley Speedway.

After leading by nearly half a straightaway at the halfway mark, Humblet struggled a bit over the second half of the race as slower traffic became a factor. At the finish, though, Humblet held off Chris Johnson by a car-length to secure the victory.

Matt Slye was third to the line, while Anthony Kincaid and Danny Harrell rounded out the top five.

Points leader Robbie Babb was collected in a crash during the afternoon practice session and made only a token appearance on the starting grid before retiring to his pit stall. Babb enjoyed an insurmountable cushion in the standings coming into the points finale, however, and claimed the 2013 championship over Humblet.

The Modified division will be back in action at Langley on Oct. 5, in a 100-lap season-ender.

Landon Florian moved out front on lap 26 and rolled to his fifth victory in a 30-lapper for the Pro Sixes class. Bobby Hall, who led laps 1-25, was the runner-up, four lengths back, while Jordan Wood, Steve Williams and Cody Carlton completed the top five.