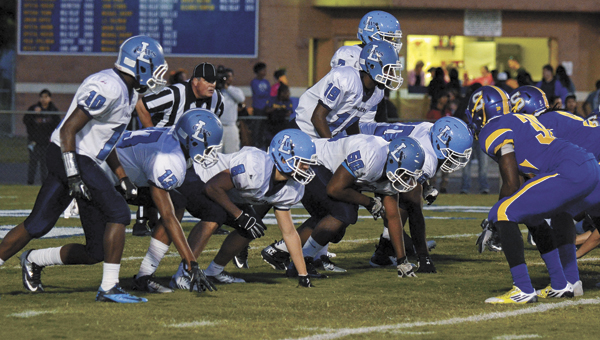 The Lakeland High School Cavaliers lined up against a difficult opponent on Friday night in host Oscar Smith High School, but self-inflicted turnovers proved to be their biggest issue. Nonetheless, the Cavs made their coach proud by continuing to fight in the face of a 56-6 loss. (Melissa Glover photo)

“First half, we had four fumbles all inside our red zone, and that’s what killed us,” Cavaliers head coach Bryan Potts said. “It was mishandled snaps, every last one of them.”

This made Oscar Smith High School’s job easy en route to a 56-6 victory.

“We can’t play that kind of ball against a seasoned team with those kind of athletes,” Potts said. “We can’t beat ourselves. That’s exactly what we did.”

Lakeland had a total of six turnovers for the game, with senior quarterback Markese Wright throwing two interceptions while filling in this week for injured junior Miles Goodman.

The Tigers led 28-0 after the first quarter, but the Cavaliers showed their offense had teeth in the second quarter when Wright connected with senior wide receiver Gregory Rountree for an 82-yard touchdown pass.

“We had some success moving the ball,” Potts said.

After his 228-yard performance on the ground last week against Indian River High School, senior running back Curtis Rouse was quieter, but still effective this time out, carrying the ball seven times for 67 yards.

“I was proud of the way our guys fought and stayed with a positive attitude all night, and they didn’t quit, and it was very noticeable,” Potts said.

This praise was also directed at his defensive unit, which routinely had to return quickly to the field after turnovers.

Potts said Goodman should be back in action next week.