Selling cupcakes for a cause

Kimberly Phelps learned how to bake as a child in her grandmother’s kitchen.

Her grandmother, Dorothy Jane Athey Nance, was full of life and independence. She also was widely regarded as a great cook and baker and passed down her recipes to her granddaughter. 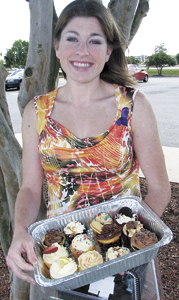 Kimberly Phelps shows off a batch of cupcakes she baked to raise money for the Alzheimer’s Association.

Nance died in January of Alzheimer’s, a disease that, for the last five years, had gradually deteriorated her brain and her life.

“She had so much spunk,” Phelps said. “When Alzheimer’s started to rob her of who she was, it was like she was trapped.”

Phelps and her family are participating in the Alzheimer’s Association’s Walk to End Alzheimer’s Oct. 13 in Virginia Beach. Their team, We Love Dorothy Jane Athey Nance, honors her grandmother.

To help with the fundraising efforts, Phelps has been selling cupcakes to friends and businesses. Several local businesses have allowed her to put out fliers advertising the cupcakes.

“I took what she taught me and am using it to help fundraise for Alzheimer’s, which affected her,” Phelps said.

The process of baking so many cupcakes has been a tasty one, though not for Phelps. She can’t eat sugar, so her friends and family have enjoyed helping her taste-test.

She said the goal is to help raise money to support Alzheimer’s research and assistance for families of those affected.

“It’s hard, and families don’t know how to deal with it,” she said. “People have to give up their jobs or put them in hospice. No one talks about Alzheimer’s, and everybody is affected by it.”

To order cupcakes or to get more information, call Phelps at 641-1310 or visit her fundraising page.

The Commonwealth’s Attorney’s office is accepting applications through Nov. 1 for its second Citizen’s Academy. The 10-session class for adults... read more