Nearly everyone is presented with a few golden opportunities in life. The real question is how they will respond to them.

One recently came to Lakeland High School senior running back Curtis Rouse against Indian River High School, and he grabbed it, running for 228 yards and a touchdown on 12 carries. 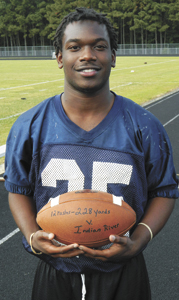 The remarkable performance helped earn him the honor of being the Duke Automotive-Suffolk News-Herald Player of the Week.

Reflecting on his play, Rouse said, “It felt good. I actually didn’t think I was going to get that many yards, but I just worked so hard, and it’s finally paid off.” He made a point to thank his offensive line for its blocking, the wide receivers for doing their job and the offensive coordinator for putting him in.

Lakeland head coach Bryan Potts said, “Curtis has been patient, he’s been hanging in there, waiting for his opportunity. We told him at some point in the season, we knew we were going to have to go to him. We had running back by committee all year, and he’s just been waiting for his breakout moment.”

That moment came on Sept. 20 when the Cavaliers desperately needed someone to step up after the team had suffered multiple injuries.

“I’m not saying I was surprised, but I was happy that he stayed focused long enough, and once he got his opportunity, he took it and ran with it,” Potts said.

It was something Rouse has made a habit of doing since he first started playing tackle football at the age of 6 with the local Pop Warner team, the Suffolk Steelers.

His father, Curtis Rouse Sr., coached him there and stated whether it was the Pop Warner, middle school or junior varsity team, “When Curtis had his chance to be a starter, he led his team in rushing.”

Even in his short time with Rouse Jr., Potts has noticed, “He always had a chip on his shoulder and always felt like he had something to prove, and that’s not necessarily a bad thing.”

Rouse Jr. had played for King’s Fork High School’s varsity team as a sophomore, and made some key contributions to last year’s Lakeland team after his family’s move prompted the school switch. However, none of his previous varsity playing time compared to the Indian River game.

Rouse Sr. said, “Just to see him surpass 200 yards in a high school game, it was thrilling for me.”

The younger Rouse credits his father with getting him into the sport.

“He just pushed me to do it, and I just started loving it.”

He was first exposed to the game as 5-year-old playing flag football. Early on, he played quarterback, but running proved to be his stronger skill set.

Rouse Sr. records every game his son plays and said his son has matured as a player by taking the time to study film, seeing how defenses react and what he can do differently.

“I think that alone has given him the opportunity to do what he did last Friday,” Rouse Sr. said.

Rouse Jr. has aspirations to go far with football.

“I want to go pro, if God takes me there,” he said. “Whatever He has in store for me, that’s what I want to do, but I do want to play pro. I want to go to college and do my best there, too.”

He said he would be the first in his family to attend college, and he is working on improving his grade-point average to open up out-of-state options.

This is one among several sources of motivation for Rouse Jr., including his family, teammates and the crowd on Friday nights. But he led with this reason: “What motivates me the most is just thinking about where I come from, where I started out, Pop Warner, coming from King’s Fork, nobody really gave me an opportunity to shine as much as I did that night against Indian River.”

His 2013 goals are to get to the playoffs and be one of the top rushers in the Southeastern District.