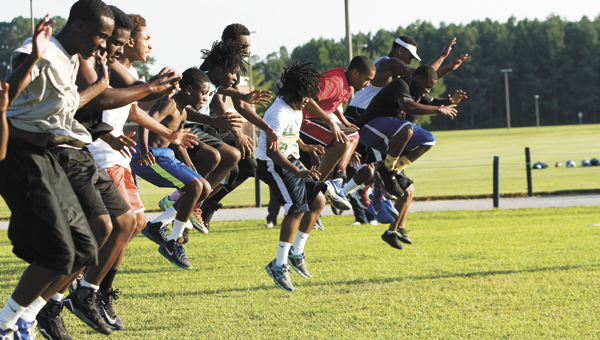 More than ever before, the race to gain a competitive edge in high school sports is fierce. Therefore, when someone offers a helping hand in the endeavor for a reasonable price, most coaches and athletes are willing to take it.

Lakeland High School and Nansemond River High School have recently begun participating in a 10-week program provided by Bon Secours In Motion Sports Performance, which aims to improve how athletes perform by teaching proper form and mechanics specific to their sport.

Sports performance coordinator Aaron McKissick leads the training sessions at both schools, and he explained why the program was created.

“Being that we’re out there and we see everything, we just want everyone to know that there’s a lot more science behind training now,” he said, even on the high school level.

A lot is expected of young athletes as they are recruited to play in college, and he said, “We wanted to educate the coaches and the kids on what it’s like to be on the next level.”

“Any school that we have an athletic contract with, we’re just out doing this for free with them,” he said.

The program is tailored, in part, to what coaches request.

Cavaliers head basketball coach Clint Wright, who felt his team needed something extra to help it be competitive this winter, said he has been excited by the level of turnout. The sessions have averaged 22 varsity, junior varsity and inquiring basketball players.

“It’s really going to help them come November when it’s time for the conditioning,” Wright said.

“Obviously, we want to maintain what I think we’ve established over my nine previous years, that we’re one of the best conditioned teams on our schedule.”

Lady Warriors head coach R. Calvin Mason said, “Just the fact that you have a professional trainer on-site, it’s exciting for the girls.”

Wright and Young both praised McKissick for the way he caters the sessions to particular sports.

Young said, “He’s very big on mimicking basketball type movement, which is big. A lot of people don’t understand that.”

McKissick said his basketball training has been focused on getting players into what’s called their base position. It’s like a defensive position where the player is crouched with their chest up and hips set back.

“You’re at your most explosive position at that spot,” he said.

When working with Lakeland’s track athletes, he has been going through drills involving the hip, knee and ankle joints, helping them to have proper extension and avoid what are called “energy leaks” due to bad form.

With swimmers, McKissick said, “We focus a lot with core stability, being nice and tight so they can stay streamlined in the water.” He teaches them to expend energy in the legs and arms, rather than the torso, and helps them build upper body strength.

He also said a goal of his teaching is also to enhance athletes’ injury prevention.

The turnout has been solid for many of the sessions thus far, and McKissick said In Motion Sports Performance will offer the same kind of program for spring sports, as well.