Five teams from the newly formed Conference 18 came together at the beginning of this week to determine the top teams in the conference and who gets to move on to regionals. 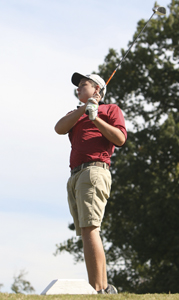 Nansemond River High School junior Leo Outland watches the ball after a drive during the first round of the Conference 18 tournament on Monday at Sleepy Hole Golf Course. The Warriors won the two-day event on Tuesday by 115 strokes to advance as a team to regional play next week.

Nansemond River High School cruised to the win with a two-day team score of 655, 115 strokes better than its nearest competitor. King’s Fork High School missed out on second place and a team berth to regionals by six strokes, finishing with a total of 776, while Lakeland High School came in fourth with an 809 total. The first round on Monday was held at Sleepy Hole Golf Course, and the event concluded Tuesday at the Newport News Golf Club at Deer Run on the Cardinal Championship Course.

Warrior head coach Craig Stephenson and his players were confident coming into the event after finishing the regular season with a record of 7-2, mostly playing against larger Chesapeake schools in the Southeastern District. The record was the best in Conference 18.

Stephenson’s reaction to his team’s performance was tempered by a weaker showing in round two.

On Tuesday, he said, “Yesterday was a bright spot. After yesterday, we were up by 61 shots, and I think we got very complacent, lackadaisical today, just because I think they had in their mind that we were already going to win anyways.”

NR senior Griffin Genier finished as the overall medalist for Conference 18, shooting a 75 on Monday and an 82 on Tuesday for a 13-over 157. Par for both courses was 72.

Sophomore Ryan Fischer finished the tourney with a 158 on rounds of 78 and 80.

“Ryan was a big highlight,” Stephenson said. “These are his two best rounds of the entire two years he’s been playing with us.”

Senior Caleb Knaack had a 169, senior Ryan Sams had a 173, junior Leo Outland shot a 174 and senior Bryce Strong struggled with a 175.

Stephenson said Strong is making some changes to his swing to help return to his old form, but the results are still mixed.

The coach attributed the team’s success to experience and a culture of winning. 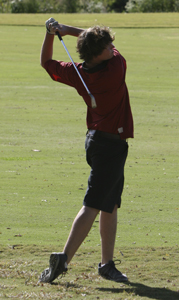 Nansemond River High School senior Caleb Knaack looks to the 18th green Monday during the first round of the Conference 18 tournament at Sleepy Hole Golf Course.

“With four seniors, you’ve got guys that have been playing golf for a long time,” he said. “We’ve been successful for the last four years as it is, so they’ve been around success and have known what it was like.”

The top two teams from the conference tourney move on to regional competition. Once players from those two teams are removed from the results, the remaining top six players qualify individually.

King’s Fork, which went 2-8 in the regular season, laid claim to two of those players: senior Griffen Saylor and junior Will Crow.

It was Denbigh High School that beat out the Bulldogs for the last regional team berth, but KF head coach Calvin Mitchell was still pleased overall.

“I was happy with the way they played, the way they have fought all year to get better,” he said. “Disappointed, yes, in not being able to accomplish our goal, which was put our whole team in regionals, but the kids played their heart out, and that’s all I can ask for.”

Cavaliers head coach Stephen Watkins said, “Obviously, we’re very pleased to have three regional qualifiers seeing that we didn’t have a program at all last year.”

He said they would have loved to have qualified as a team, but felt the other team members helped contribute to Huffman, Harris and Boswell’s success through encouragement.

Though Lakeland finished the regular season 0-8, Watkins was positive about the year.

“We’ve been consistently getting better every match, which is what you want to do,” he said.

Phoebus High School came in last with an 845 two-day total. Heritage High School did not field a team.

Region 4A South will face off on Monday and Tuesday at Sleepy Hole Golf Course with the top two teams advancing to the state level of play.