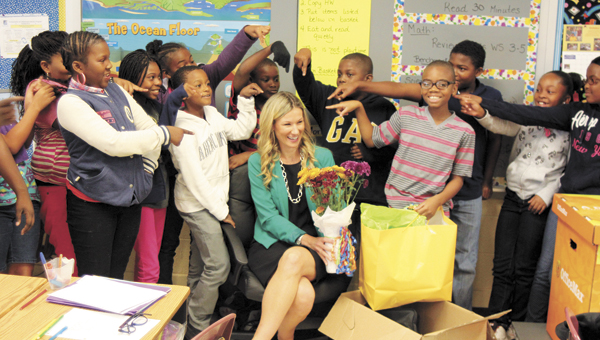 A Suffolk office supplies store surprised a hardworking public school teacher Tuesday with a bounty of classroom supplies that will benefit her entire school.

Academic coach Meagan Cunningham got a pleasant surprise when staff from OfficeMax showed up at Booker T. Washington Elementary School with almost $2,000 worth of goodies.

“This is so awesome,” said Cunnigham, who was selected as the recipient by principal David Reitz, whose school OfficeMax in turn selected for the classroom supplies from all area schools.

“I definitely feel like my day is brighter now.”

The company started A Day Made Better, an annual event, in 2007. Since then, it and other OfficeMax programs have contributed more than $25 million in grants and supplies to more than 31,00 teachers, according to a news release.

Brian Hannegan, its manager, said the Suffolk store solicited donations from shoppers. “We had a big table,” he said. “It had some information about how much teachers spend each year, which is about $1,500 of their own money.”

Around $850 worth of supplies were donated at the store level, he said, then the company chipped in about another $1,000.

Some of the bigger-ticket items that Cunningham and the school received include a new office chair, Kindle and digital camera.

“Is my face turning red?” Cunningham asked, unpacking the supplies and holding items up to show students.

Reitz said he secured the donation by explaining to OfficeMax why Cunningham deserved “a day made better.”

“Due to the fact that Mrs. Cunningham has such a large impact on the school, I thought it would be best to recommend her,” he said.

“She comes here early in the morning, stays late at night — she’s here all the time!”

“She’s in and out of classrooms, supporting different teachers. Her impact is huge.”

Some of the other supplies included pencils, pens, glue sticks, loose-leaf paper and binders, Hannegan said, just to name a few.

“It’s going to go to Mrs. Cunningham, but she’s more than welcome to distribute it around the school,” he said. “I know in years past that’s what has happened.”