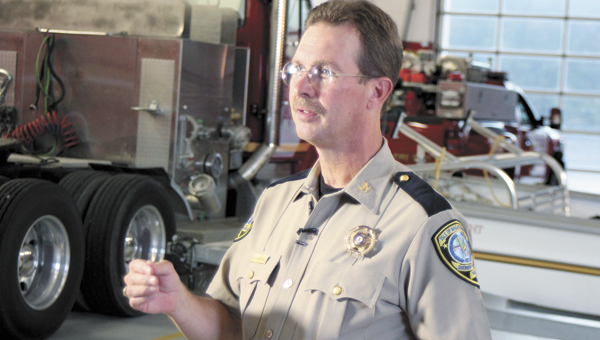 Isle of Wight Sheriff Mark Marshall talks to reporters at the Carrollton Volunteer Fire Department building on Route 17 after an 11-year-old girl was abducted nearby and sexually assaulted.

A manhunt has begun after an 11-year-old Carrollton girl reported being abducted from her bus stop on Route 17 and sexually assaulted during an ordeal lasting 4 ½  hours.

Isle of Wight Sheriff Mark Marshall told reporters the girl said she was forced into a white Chevy coupe by an older white male about 8 a.m. Wednesday.

Marshall would not specify where the reported abduction occurred. He said it was at the girl’s usual bus stop near her home “in the neighborhood she was residing in” — and near the Carrollton Volunteer Fire Department building on Route 17.

“This is a very active, ongoing investigation, and we are not going to release her name, address, or the location where the abduction took place,” the sheriff said.

Isle of Wight County Public Schools confirmed the girl attends Smithfield’s Westside Elementary. She was alone at the time of her reported abduction, the sheriff said, and there are currently no known witnesses.

The girl reported the incident to her parents after her alleged abductor set her free at the same place he took her, Marshall said. Her family reported “an assault in the local area” at 12:30 p.m.

The girl has described the man as an older white male with a blondish/gray beard, blond hair, blue eyes, cut-off jean shorts and tennis shoes.

“We don’t have a license number, and we have no other further descriptors at this time,” Marshall said.

Investigators have been talking to the girl at the Children’s Hospital of the King’s Daughters, where she was taken for treatment and a forensic examination, Marshall said.

“This was an extremely traumatic event,” he said. “She alleged that she was severely assaulted” in two unknown locations she was driven to.

“This is a very young victim that saw certain things during this event,” Marshall said. “She described it as she went a long way.”

He said the alleged crime was a “stranger abduction,” adding, “There is no reason to believe the victim and the suspect knew each other.”

Virginia State Police are assisting in the investigation, and the FBI has been notified, Marshall said.

Investigators discovered some items of evidence, and “will be pursuing a number of different leads,” he said.

Holly Topolnicki, whose daughter is a fifth-grader at Westside Elementary, was critical of the school district’s handling of the incident.

“I’m a little peeved at the school because they didn’t say the child had been returned to her parents,” Topolnicki said.

“I had no idea whether or not it was my child.”

The automated message system parents were notified with is “a great idea,” she said, but “they needed to be a little more explanatory.”

District spokeswoman Kenita Bowers said in an email, “We will continue working with local law enforcement and have also encouraged our bus drivers to be on high alert to report any unusual incidents that they observe.”

Sheriff Marshall told parents to “make sure you talk to your child (and tell them) they are never to go into a vehicle, they are to run, (that) any time they see something that does not look ordinary or normal, to tell somebody.”

Anyone with information is urged to call 1-888-LOCK-U-UP.