It was the fourth year Mason and players have been involved in the event, which started in Harbor Park and featured a three-mile walk through downtown Norfolk. 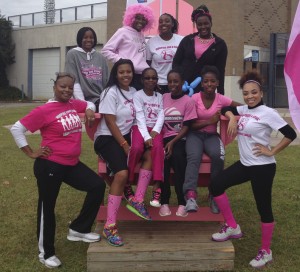 “It’s part of what we try to do as a basketball program,” Mason said. “We try to have one community service project each month, and that was our first one for the year.”

Mason said, “I was amazed the first time we participated how many people are actually involved.”

There were about 1,800 paid registrants this year, according to Brown, while approximately 4,000 people total walked in the event to which everyone in the Hampton Roads community is invited.

Brown was pleased with how everything came off, saying, “We were very, very excited.”

Mason said the Nansemond River group paid the fee to enter the walk, but added, “We make a larger donation in January when do our breast cancer awareness game.”

“We also had two of the survivors that we honored last year that participated along with us,” he said, referring to Jacqueline Washington and Geraldine Odom.

Mason said the issue of breast cancer is important, especially for young ladies. “It’s a big part of their lives, whether it’s directly affecting them right now or not,” he said.

While he said no one is directly affected by it this year through an immediate family member, this was not the case a few years back when Ciera Mobley was with the team. Her mother was a breast cancer survivor, and Mason said, “That really brought it a little bit closer to home, so we’ve tried to be actively involved.”

He said the team goal is simply to contribute to the financial efforts aimed at stamping out this dreaded disease.