Thirteen-year-old Cierra Sheppard of Suffolk won the 14-and-under age group on Saturday in the Neptune 5K held at the oceanfront in Virginia Beach.

Sheppard covered the 3.1-mile course in 23:53, a personal best time, putting her ahead of the other 23 runners in the age group. 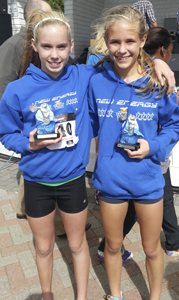 Suffolk runners Betsy Pollard and Cierra Sheppard celebrate after being victorious in separate races on Saturday in Virginia Beach. Sheppard took first in the girls’ 14-and-under age group of the Neptune 5K with a personal best time of 23:53, while Pollard won the girls’ 1-mile race.

“I was really excited,” she said. “I wasn’t expecting that at all.”

Her time marked an approximately two and a half minute improvement from her last 5K.

Sheppard runs as part of the Suffolk New Energy Youth Running Group under the guidance of its head coach, her father Steve Sheppard.

He noted she usually runs the 1-mile race, but he said, “She’s been kind of lobbying me lately to let her run the longer race and the shorter race on the same day.”

Saturday was the second time she had run in the 5K, and after this latest performance, her dad said, “She made me believe that she really wanted to do it.”

She said, “I really wanted to do the 5K because last year I didn’t get a chance to do it, and I just really wanted to. I don’t know why. I just thought it would be a fun time.”

She also said she was unsure how she managed to cut so much time off her personal record, but said, “I guess I was just really determined not to let the kid in front of me beat me.”

She trailed the runner by five to 10 feet for a while, but when she was about an eighth of a mile from the end of the race, she said, “I passed him, and I was really excited.”

Her father cited the unusual difficulty of running on the day, given what he described as 20-plus mile per hour gusts on the Atlantic Ocean.

“The final mile and a half was right into a headwind,” he said, speaking from experience after having run the 8K at the same location later in the day.

His daughter admitted, “At first it was really hard, but after maybe five minutes of being in the wind, I got used to it.”

Steve Sheppard said, “It was a really tough race, so I was pretty happy with her.”

After this, she still managed to come in third overall in the girls’ one-miler, but said her “legs were really heavy. They felt like lead.”

In the boys’ 1-mile race, Pratt placed second out of 34 runners.