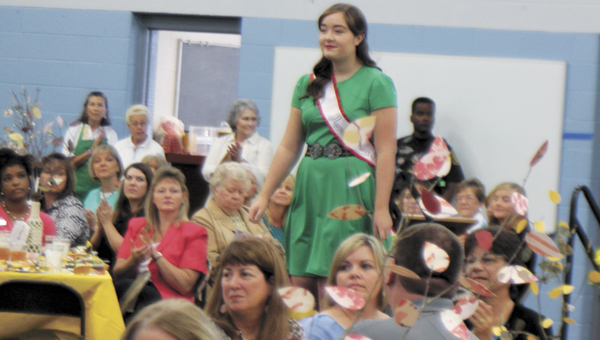 Bazemore’s various pursuits have included theater, VOICE Club and Project Lead the Way. She was a delegate to the Hugh O’Brien Leadership Conference, attended the 2013 Society of Women Engineers’ High School Visitation Program, and was a Sister Cities Youth Ambassador to Oderzo, Italy.

The outgoing teen was selected for the honor from a field of 10 girls representing Suffolk’s five high schools. She will perform a range of duties at the 36th annual Peanut Fest, including attending events, judging competitions and waving to the crowd.

The Queen’s Court was introduced to attendees at the event, held at the National Guard Armory and produced by The Pilot Club of Suffolk, by Queen and Court Assistant Coordinator Brittney Drames.

Drames described the girls as “amazing young women.” Each wearing a pink cowboy hat in line with this year’s festival theme, Bootscootin’, Shell Crushing Good Times, they entered the room one-by-one, proceeding down the central catwalk as Drames announced their achievements.

The Rev. Matt Winter of Bethlehem Baptist Church, who delivered the invocation, had some special praise for the girls.

“I have a one-week old daughter,” he said. “I think if she can grow up to be who you ladies are, we would truly blessed.

“We may be inundated with media saying our young people are going down the wrong path, but it’s clear there are some strong leaders in our community, and Suffolk is going the right way.”

Mayor Linda T. Johnson told Bazemore, “I know you are going to make your city proud for the next week and the rest of your life.”

The fashion show component of the event demonstrated animal print is in vogue again.

The luncheon and fashion show also officially kicked off the Peanut Festival, which enters full flight at the Suffolk Executive Airport next weekend.

Butch Twiford, who crowned Bazemore with the help of fellow festival co-chair Jack Brinkley, said it celebrates “our agriculture, our heritage, our strong, growing community.”

The event has become a part of many people’s lives, he said, adding, “There’s something for everyone to enjoy at the Suffolk Peanut Festival, so I encourage you to experience the sights, sounds and delicious tastes of this year’s festival.”