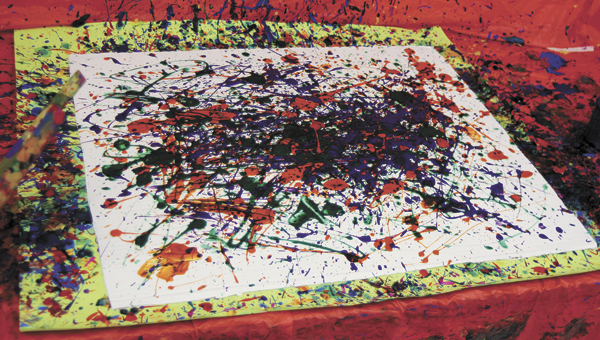 A creation done by the Northern Shores students.

Waders and goggles would be the recommended attire for visitors to Northern Shores Elementary this coming week.

The brainchild of student teacher Whitney Valdivieso — a huge fan of the famous 20th century American abstract expressionist painter — the entire school is involved in an effort to emulate Jackson Pollock, AKA Jack the Dripper.

“Jackson Pollock is one of my all-time favorite artists,” said Valdivieso, due to graduate from Longwood University as a certified art teacher in December. 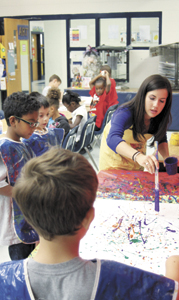 “I really like the way he was just free with his painting. One of my favorite quotes (of Pollock’s) is, ‘The painting has a life of its own.’”

In groups of two or three, students donned plastic smocks before reaching for sticks poking from tins of purple, green and orange paint.

The cardboard canvas they dripped and flung at had been primed with plain white house paint, and the plastic sheeting stretched underneath and halfway up the wall to catch overruns was soon as spattered as the target.

“It felt like throwing the paint everywhere and making a neat picture,” said Aidan Shields, one of the second-graders.

Valdivieso, of Chesapeake, said it was her first time teaching the Pollock class. “I just thought I really would like to bring that into the classroom and explore his technique, which is also a lot of fun for them,” she said. “They really enjoy it.”

The lesson, which will be repeated among other Northern Shores art classes into next week, until the entire student body has experienced it, starts off with a video of Pollock, who worked from the 1930s until his premature 1956 auto-accident death, explaining his unique technique.

Awaiting their turn Friday, the second-graders worked on another of Valdivieso’s lessons: gluing colored pieces of paper to create a chameleon.

Belote said, “They just think it’s so cool — they really get excited. They see the paint and they almost squeal.”

She said the Pollock-inspired paintings would be displayed in the hallway.

When the gallery paid $2 million for it in 1973, it was the highest price ever paid for a painting at auction.

Estimates of its worth these days vary from $20 million to $180 million — not that the Northern Shores kids are counting.