The Isle of Wight Sheriff’s Office has released two sketches of the unknown suspect in the Wednesday abduction and sexual assault of an 11-year-old girl.

One sketch shows the man without eyeglasses and the other with glasses. The victim gave a detailed description of her attacker and his vehicle, which included the fact he wore the glasses low on his nose and wore them only some of the time.

The man snatched the girl from her bus stop in a Carrollton-area neighborhood about 8 a.m. Wednesday and drove her to two different remote locations, where he assaulted her. He then returned to the area of her home and released her about four hours later.

He reportedly was seen in Suffolk’s Holland area, where he asked for directions from a trash collector at the intersection of Longstreet Lane and Quaker Drive.

The girl reported her attacker was an older white male of medium build, about 5 feet 8 inches tall and weighing 175 pounds, according to Isle of Wight County Sheriff Mark Marshall. 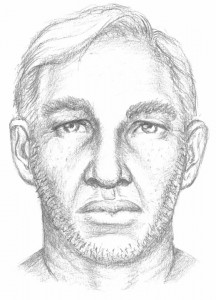 She did not see any tattoos or piercings, Marshall said, but that does not mean the suspect has none.

He was a nonsmoker, a slow speaker, and his white Chevrolet coupe had a Virginia state inspection, a Chevy sticker on the front windshield, black and gray interior, leather or vinyl seats and manual roll-up windows.

She said the car was older inside, Marshall said, with some pieces missing from a section of cracked dash, but the outside of the car was new-looking.

Inside the car were three homemade clay sculptures, he said — one star-shaped and painted with black stripes and the others green and pink, which the girl thought were made by children.

Investigators believe the second attack happened near the Isle of Wight fairgrounds, in the area of Iron Mine Springs Road in Windsor, but still are working on the location of the first attack.

Anyone with information is asked to call 365-6290 or email tips@iwus.net.