Hundreds of parents and kids relished the opportunity to touch and climb on trucks and vehicles of all sorts at the Suffolk Nansemond Historical Society’s second Touch a Truck, Train and More on Saturday.

An influx of people visited after the Peanut Fest parade finished making its way down North Main Street, co-chairwoman Betsy Totten said. More than 30 vehicles were available for kids to investigate. 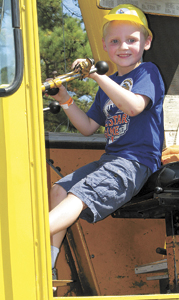 Matthew Smith, 5, tries out the controls on a piece of construction equipment at the Suffolk Nansemond Historical Society’s Touch a Truck, Train and More event on Saturday afternoon.

“My husband brought them last year, but I didn’t get to come,” Lisa Smith said as she followed 5-year-old Matthew Smith from vehicle to vehicle. “He loves trucks. He loves all this construction equipment, ambulances and everything.”

Proceeds from the event help support the historical society’s educational programs and the operation of the Suffolk Seaboard Station Railroad Museum, near Market Park where the event was held.

“It has been a bang-up crowd,” co-chairwoman Gin Staylor said. “Everything has been wonderful.”

The highlight of the event for many was the Planters Nutmobile and Mr. Peanut, who were fresh off the parade route. Other vehicles included a school bus, construction equipment, an ambulance and fire truck, the Suffolk Police Department mobile command bus, tow trucks, antique vehicles and radio-control planes.

Despite unseasonably hot weather, kids who had already seen all the vehicles could also enjoy a sandbox and photo booth.

“The kids have had fun,” Larry Riddick said. “That’s the important thing.”

See more photos from the event on the Suffolk News-Herald’s Facebook page.