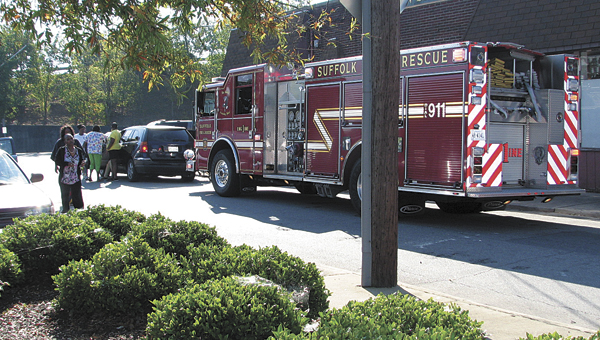 Rescue workers on the scene of an accident on South Saratoga Street Saturday morning where a driver hit a 2-year-old boy. The boy suffered only minor injuries, a city spokeswoman said.

A 2-year-old boy was struck in downtown Saturday morning as hundreds of people arrived in the area for the Peanut Fest parade.

The boy was taken away from the scene by ground ambulance and airlifted from a nearby location to Sentara Norfolk General Hospital. He suffered only minor injuries but will be kept in the hospital overnight for observation, city spokeswoman Diana Klink said in a press release.

The accident happened about 9:51 a.m. in the 150 block of South Saratoga Street.

Shawnda Jones, who witnessed the accident and knows the driver but was not with her, said the boy “came from out of nowhere.”

“She wasn’t going really fast,” Jones said, estimating the driver’s speed was about 15 miles per hour. “The traffic was so congested, and everybody was looking for parking.”

Jones said some of the people with the boy picked him up off the street after he was hit. He was talking and crying, she added.

“He ran out there so fast.”

Jones said the driver, whose name has not been released, is pregnant and has children of her own.

No charges were placed against the driver of the vehicle, Klink said.