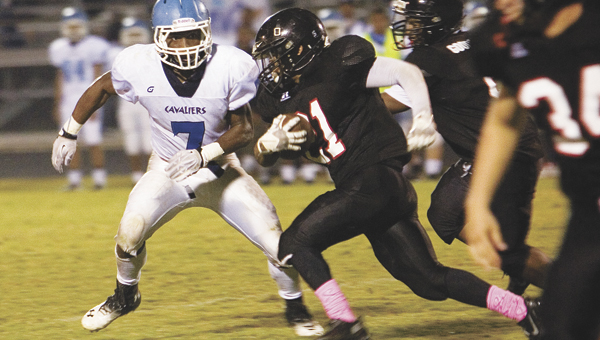 Nansemond River High School senior running back Latrell “Vegas” Sandifer races for more yardage against visiting Lakeland High School on Friday, homecoming night. Sandifer had his way against the Cavaliers defense, running for 221 yards and a touchdown in the Warriors’ 31-12 win. He also had a key interception that kept momentum out of Lakeland’s hands going into halftime.

The Warriors, on the other hand, came with the express intent to run. The final score told the story of who succeeded as Nansemond River took home a 31-12 victory on homecoming night.

“We had our game plan set going in, and we stuck with it,” Warriors head coach Tracey Parker said.

The ground game has always been the main feature of the Warriors’ offense, and Friday was no exception. The home team generated 306 of its 394 yards of total offense on the ground.

Sandifer made it back-to-back weeks with 200-yard performances, carrying the ball this week 13 times for 221 yards and a touchdown.

However, he was not alone in covering ground, as sophomore running back Terrance Lambert had seven carries for 50 yards and scored the first touchdown of the game.

The Cavaliers managed to move the ball, as well, and got into the Warriors red zone midway through the second quarter off a 34-yard pass from junior quarterback Miles Goodman to freshman wide receiver Alajuwun Langston. Goodman ran it in, but the extra point was bumbled, and they still trailed 7-6.

Sandifer lit up the Cavaliers defense with an electrifying 26-yard scoring run on the ensuing drive.

After the Warriors defense forced a punt, the offense really started to open up as junior quarterback Jermaal Wells hit junior wide receiver Keion Roberts in the back left corner of the end zone with a perfectly placed 22-yard touchdown pass.

Lakeland now trailed 20-6 as the game seemed to be devolving into blowout territory, but then with 36 seconds to go in the first half, Langston returned the kickoff nearly 90 yards to Nansemond River’s 7-yard line.

A defensive pass interference penalty moved the Cavaliers up to the 4-yard line, but then a Goodman pass was intercepted by Sandifer.

Lakeland head coach Bryan Potts pointed to that play, saying, “It was a big momentum boost for them, and it kind of turned the whole course of the game around.”

He summed up the contest from his team’s perspective, saying, “Missed opportunities. I think that’s what it really boiled down too.”

The absence of usual Lakeland center, senior Jerrell Demiel, who was injured, was also noticeable as the Cavs suffered some bad snaps, leading to two safeties in the second half.

Goodman scored again late in the third quarter on a 2-yard run, but they were the last points Lakeland would manage.

“We’ve just got to do what we do, but do it better, and we’ve got to have more of a sense of urgency in doing it,” Potts said.

Parker was pleased his defense was able to slow Lakeland’s attack.

“We kind of feel like we needed to put some pressure on the quarterback, not just let him sit back there and complete balls,” he said.

Senior linebacker Marvin Branch had 12 tackles for the Warriors.

Rounding out the rushing leaders for Nansemond River, Wells, who had six completions for 85 yards, ran for 57 yards on 12 carries and scored his team’s final touchdown, a 5-yard run.

Parker gave praise to those who paved the way, saying his offensive line “did a pretty good job here, back to back weeks. Tonight we were able to play some of our young guys up front. They kind of showed us some good things.”