With Election Day less than a month away, the campaign trail is heating up, and statewide candidates are filling their schedules to meet as many voters as possible. 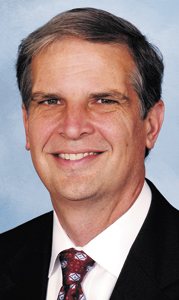 Attorney general candidate Mark Obenshain swung through Suffolk on Monday and met with Suffolk News-Herald staff. He talked about his record in the state senate and his plans for if he is elected attorney general.

Obenshain, who hails from Harrisonburg, was elected to the state’s senate in 2003. He is one of the founders of the Harrisonburg and Charlottesville law firm of Lenhart Obenshain PC.

He is joined on the Republican ticket by gubernatorial candidate Ken Cuccinelli and E.W. Jackson, who is running for lieutenant governor.

If he’s elected attorney general, he said, he will continue to work on policy initiatives combating child predators and human trafficking and protecting senior citizens from abuse, neglect and exploitation.

On the economic front, Obenshain said, he will work to fight industrial regulations.

“Regulations kill jobs,” he said. “We’re prepared to stand up for Virginia jobs.”

He also has proposed a plan for the attorney general’s office to be more transparent in disclosing the private law firms with which it works and the terms of agreements with them.

Regarding litigation pending against the state’s public-private partnership with Elizabeth River Crossings to toll the Midtown and Downtown tunnels between Norfolk and Portsmouth, Obenshain said the case likely will be over by the time he takes office if elected. However, he said the case should send a message to state leaders that the agreements “can’t be adopted in a political vacuum” and that the state’s Public-Private Transportation Act may need to be changed.

On the big issue of the day in Virginia politics — ethics — Obenshain said he will advocate for reform.

“I think that the voters are disappointed, disheartened and not sure about their level of confidence,” Obenshain said, referring to the continuing revelations of gifts accepted by Republican Gov. Bob McDonnell and members of his family. “They’re expecting some aggressive action.”

Obenshain said he supports a ban on gifts to elected officials over a $100 threshold and believes the same rule should apply to members of the official’s household. He also wants to beef up reporting requirements.

“I think the General Assembly needs to act on that and apply it to themselves,” he said.