Nansemond River High School graduate Shelbi Holloman went to Roanoke College for the academics and the opportunity to be a leader on the field hockey team, and her leadership manifested itself in a big way recently.

The Maroons have been struggling this year, and they carried a 1-5 record into their first Old Dominion Athletic Conference game against the top team in the conference, Virginia Wesleyan College. 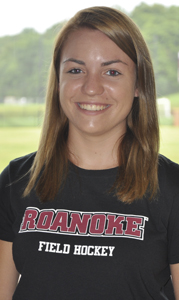 A scoreless tie forced overtime, and less than a minute and a half in, Holloman put in the game winner.

“It couldn’t have been executed any better,” Roanoke head coach Briana Banks said of the play.

The goal came during a penalty corner, right after Holloman’s teammate Isabella Lucia fired a hard shot at the goal.

“I put my stick out there hoping it would go in, and I heard a touch,” Holloman said of her deflection that sent the ball in.

She was also quick to deflect praise to the team as a whole for the victory.

“It was one of our best games,” she said. “We were all in there supporting each other, and it wasn’t just like a one-person effort.”

“It doesn’t matter who scored.”

However, she did end up being singled out when, as a reward for her performance, she was named ODAC Player of the Week, becoming the first Roanoke field hockey player to receive the honor in more than nine years.

“I was speechless,” Holloman said when she discovered she had won the award, expressing surprise because she said there were so many deserving candidates.

“It was an honor to put Roanoke field hockey out there and to see that hard work does pay off, whether it’s scoring the goal or assisting the goal or just winning the game,” she said.

As the award ended a long drought of such recognition for the Roanoke program, Banks said, “It was just kind of crazy, almost like an ‘about time’ sort of thing, at the same she’s deserving.”

She said, “It was definitely her time, so it was good.”

For three years of Holloman’s career with the Lady Warriors, Banks had an eye on her. The expectation entering this year was that Holloman would bring leadership and a boost to the offense.

Nine games into the 2013 season, Banks said, “She has definitely added a lot to our attacking unit. She is leading in shots, which is extremely important right now. She brings a lot of speed, she definitely knows the game, and she’s very passionate about her play.”

Ten games have now elapsed for the Maroons, and Holloman leads the team in shots with 30, in shots on goal with 16 and she is tied for the team lead with three goals.

Holloman commented on what playing at the college level has been like.

“It’s definitely different,” she said. “It’s a lot of hard work. You definitely have to have good time management with your studying. It’s easier for me because playing in high school you kind of have the same schedule.”

Classwork is followed by practice, though the practice load is now greater.

After hearing about Holloman’s success at the next level, Nansemond River head coach Mowry said, “It doesn’t surprise me.”

Given her former player’s attitude and effort she applies toward field hockey, Mowry said she knew Holloman “was going to work really hard to be in that starting lineup, and that’s exactly what she’s done.”

As a freshman, she has started nine out of 10 games. She acknowledged a personal goal she has had in mind since she signed with Roanoke College, though like credit for the Virginia Wesleyan win, she is not too hung up over it.

“I really want to push myself to try and get Rookie of the Year, and so I just keep that in the back of my head when I’m playing,” she said. “I just love the game, so it is not too much about me getting all these awards and stuff.”