Ending the way he started 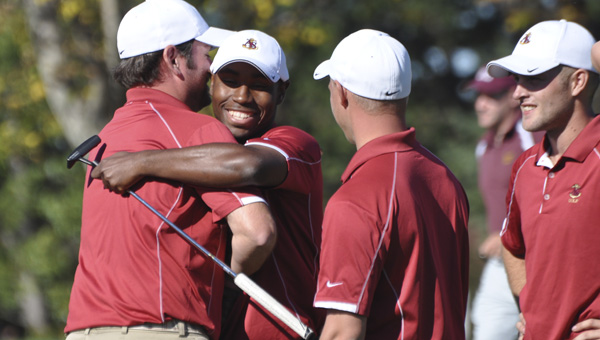 Suffolk’s Ben Hunter is congratulated by his teammates from the Apprentice School on Tuesday after winning the second USCAA Individual National Championship of his career. He birdied a one-hole playoff for the win on the Penn State Blue Course in State College, Pa.

Throughout his college career at The Apprentice School, Ben Hunter of Suffolk has never been far removed from the top individual spot in the United States Collegiate Athletic Association National Championship.

He won it as a freshman, placed third as a sophomore and second as a junior. On Tuesday, he completed a second round that matched his first round for a two-day total of two-over 146 on the Penn State Blue Course in State College, Pa.

“It was absolutely amazing,” Hunter said. “I’m truly honored and blessed to be a four-time All-American and a two-time national champion. I give God all the glory. I get the trophy, but He gets all the glory.”

In events leading up to this one, Hunter had been successful in his goal of putting together solid back-to-back rounds.

“I felt like my game was coming into form around the right time,” he said.

Hunter shot a one-over 73 on both days, and was locked in a five-way tie for first after the first round. 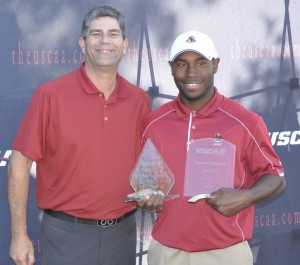 Suffolk’s Ben Hunter holds his awards for being the 2013 USCAA Golf National Champion Medalist and a 2013 USCAA Golf All-American on Tuesday. The hardware was presented to him by Steve Eskey, the assistant golf pro at Penn State Golf Course.

“It’s good to see him win another national championship in a tough field,” he said.

Unfortunately, the team championship Hunter had been hoping to help the Builders achieve did not come to pass. The Apprentice School finished in sixth place, 55 strokes behind the winners from Daemen College in Amherst, N.Y.

Builders assistant golf coach B.J. Maben said it was not for Hunter’s lack of trying. He said while Hunter’s scores this time may not have been as low as before, he hit the ball well.

“You could definitely tell that he was just in the zone,” Maben said.

Excluding the playoff hole, of the 18 holes he played on Tuesday, Hunter hit 16 of them in regulation, meaning he had the chance for birdie.

“For somebody to go out and hit 16 greens is really phenomenal,” B.J. Maben said.

Doing this under pressure with the national title on the line only make it more impressive. Hunter alluded to the pressure down the stretch.

“It set in a little bit, and I ended up bogeying my next to last hole, and I got up and down on my last hole to save par,” he said.

He did not play in the same group with the fellow leaders and later discovered he would be in a playoff with Matheison.

At the request of Joey Maben, his father, B.J. Maben walked the playoff hole with Hunter to keep him calm. But, B.J. Maben confessed, “I think I may have been more nervous than he was.”

Hunter said he was grateful to have the support, adding that B.J. Maben “definitely gave that extra sense of security.”

On the par-5 playoff hole, Hunter teed off and then was able to use a fading shot he has been practicing for a while to get around a tree and hit the green in two shots.

Hunter said his ability to execute the shot made the difference.

“I’m more comfortable in the left-to-right shot,” he said. “My ball striking was just stellar the last two days, compared to the last two years. I have more control over the golf ball now.”

That control has been evident in his average score, which has dropped a stroke each year from 76 to now around 73.

“It’s pretty incredible to be able to do that each and every year,” B.J. Maben said.

The left-to-right shot worked, and Hunter’s next hit put him four feet away from a birdie. Matheison finished up first, achieving par, and then Hunter made the putt to end it.

“I feel like there’s no better way to end my career,” Hunter said of bookending his college experience with national titles. “Finish it just the way I started it.”