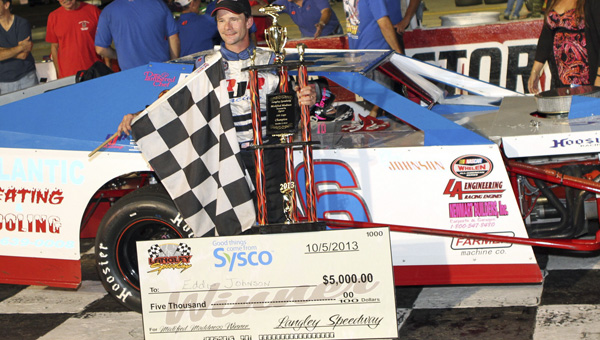 Eddie Johnson celebrates in Victory Lane with his trophy, the checkered flag and a $5,000 check following his win in the Modified Madness 100 event of the NASCAR Whelen All-American Series events at Langley Speedway on Saturday.

Longtime late-model standout Eddie Johnson took the lead for good on lap 84 and rolled to a $5,000 victory in the Modified Madness 100 event of Saturday’s NASCAR Whelen All-American Series program at Langley Speedway.

Johnson qualified on the pole, at 90.544 mph, and led the opening lap before ceding the top spot to Jimmy Humblet on Lap 2. While Johnson drifted back just outside the top five, Humblet, Shawn Balluzzo, Mike Rudy and Robbie Babb took turns at the head of the field.

Soon after the final restart, at lap 65, Babb and Johnson emerged in first and second. Working traffic, Johnson nosed ahead for the first time on lap 74, only to have Babb return the favor on the ensuing circuit.

On lap 84, lapped traffic came into play again and, once more, Johnson took advantage, moving out front. By the finish, Johnson had stretched his winning margin to nearly half a straightaway over Babb, the 2013 division champ. Cale Gale was third, while Humblet and Rudy completed the top five.