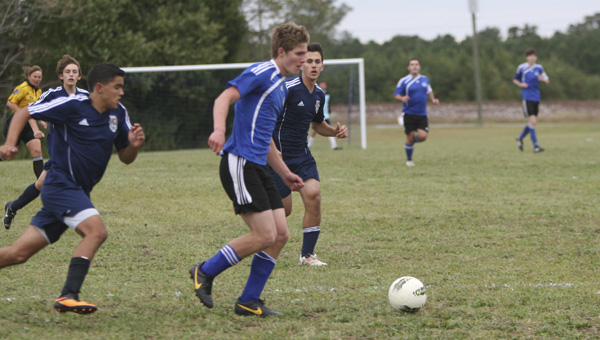 Suffolk Christian Academy sophomore forward/midfielder Steven Effler makes a push through the Summit Christian Academy defense early in the second half on Tuesday. The Knights showed some fight, but then receded for a 6-1 home loss.

The Knights lost a prior meeting this season against the Eagles by a score of 7-0. This time showed the potential to be much different early on, with SCA trailing only 3-1 at halftime, but then Suffolk Christian lost heart, leading to a 6-1 final score.

SCA head coach Steven Milner said his team played much better in the first part of the second half, and his players “were threatening on goal, we just couldn’t get anything inside the net, and then about halfway through, they just lost hope and pretty much gave up.”

Milner’s hopes had been riding high until the midpoint of the second half because he thought the game was actually closer than the 3-1 halftime score indicated.

He admitted a Summit player scored on an excellent shot in the upper corner of the goal, but another goal came off a controversial direct free kick on the edge of SCA’s goal box, which the kicker curled right into the back post for the score.

However, he was also frank about his own team’s goal, which got some help from the Eagle goalkeeper. Knights sophomore forward Michael Cornette sent in a cross that rolled up to the goalie, who tried to hit it up over the crossbar, but instead caused it to fall into the net.

Milner said he changed the formation of the team in the beginning of the second half, which made a difference, and also allowed seventh-grade forward Graham Long to showcase his continued development.

“He just blossomed out there, doing well, taking on defenders and then crossing the ball,” Milner said. “It’s been a trend from the last couple of games we’ve played, and I’ve had him out on that right wing.”

The coach also listed junior midfielder/defender David Day as a standout, “especially for being in a wreck earlier that day.”

Day flipped his car twice that morning, receiving scrapes to his knee and back and experiencing minor muscle spasms in his back. Nevertheless, he was out on the field and making some important contributions in the midfield, pushing the ball forward.

“I have a dedication to the team, so I was going to fulfill it,” he said.

He was not able to completely ignore his injuries, though. “I wasn’t hurt bad, but it definitely took a toll,” he said.

He does not expect to miss any games in the remainder of the season.

Despite the loss, Milner said he is still excited about the rest of the year. Winning one more game, he said, “would mean we have a winning record for the first time in a couple years.”

The Knights (5-4, 1-3) will travel Friday to play the Beach Breakers, the team Milner said will end the season No. 1 in the Seven Cities Athletic Conference.

The challenge should be significant, but Milner expressed continued confidence in his players.