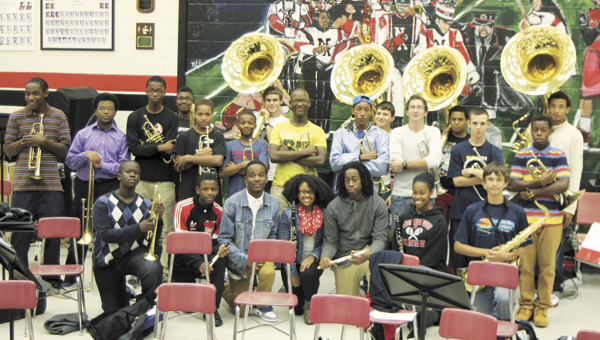 Nansemond River High School’s Marching Warriors will be the only band from Virginia in the nation’s oldest Thanksgiving Day parade, in Philadelphia. Parents and band supporters are hoping to raise money for new uniforms and are asking folks to donate $5 each toward the cause.

When the nation’s oldest Thanksgiving Day parade gets underway in Philadelphia for the 94th year next month, Nansemond River High School’s Marching Warriors will represent not just Suffolk, but all of Virginia.

“It’s kind of nostalgic for me, because I marched in it myself at college at Norfolk State,” said Edward J. Woodis, director of the marching band that will participate in the 1.4-mile Thanksgiving Day Parade in Philadelphia for the first time since 2010 and the second time ever.

Woodis said marching in the parade is part of his strategy for landing a berth in New York’s Macy’s Thanksgiving Day Parade.

“One of the things they’ve always said is we need to work on TV time,” said Woodis, explaining that the more prime time exposure the marching band has, the more attractive it becomes in the eyes of parade officials.

But before the 72-member band sets off for Pennsylvania, it hopes to raise enough money to replace at least part of its uniform.

“Right now, we are trying to get some of the pants replaced,” Woodis said, adding the current uniform has been in rotation eight years.

He believes the new attire would put an extra spring in the Warriors’ step.

“For any band, getting new uniforms is always a big boost,” he said. “Our goal is for the uniform to have a new look and new design.”

To fund what adds up to a major purchase, the band is asking folks to donate $5 each. The campaign will run throughout the school year, Woodis said.

“We have a few donations trickling in here and there,” he said, adding that radio and public access television advertisements are airing to raise awareness. “The word of mouth is getting around about it.”

Folks can drop cash, or checks written out to Nansemond River High School Band, at the school itself, or mail checks to the school at 3301 Nansemond Parkway, Suffolk, VA 23434.

Meanwhile, Woodis is diverting proceeds from an ongoing fruit sale fundraiser to help defray the Philadelphia trip’s cost to parents. To support the effort, visit www.riversweet.com/nrhsband13.

Thomas McLemore, principal at Nansemond River, paid tribute to parents who support their children’s after-school groups, like the Marching Warriors.

“Whether it’s band, basketball or football, they work extremely hard for our kids,” McLemore said.

“It helps them to organize their thoughts,” he said.