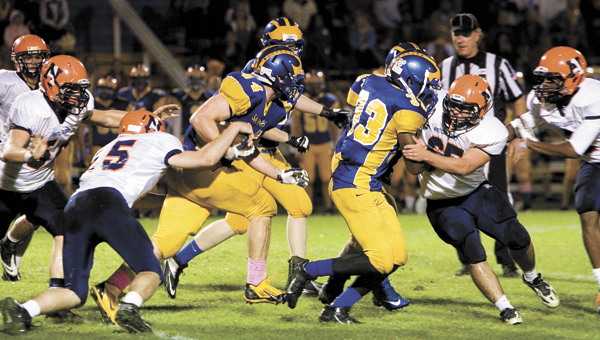 Nansemond-Suffolk Academy junior fullback David Gough looks for more yardage Friday as a Norfolk Academy defender gets a hand on the ball. The Saints ended up losing 21-16 in a controversial game on their homecoming night.

Friday night’s damp homecoming football game between Nansemond-Suffolk Academy and visiting Norfolk Academy was a game shaped by controversy as much as excellent plays and tough defense.

Momentum had been swinging the Bulldogs’ way throughout the second half as they went from trailing at halftime to leading by five in the third quarter. It ended up being a lead they would never lose.

As time wore on in the fourth quarter with NSA on defense, the cries started coming from the Saints sideline that the defense needed to come up big.

It did, forcing and recovering a fumble in Norfolk Academy territory as a light mist began to fall on the proceedings. Soon thereafter, junior fullback David Gough made a potentially game-defining first down run, but then was ruled to have fumbled before hitting the ground. The Bulldogs recovered.

Nansemond-Suffolk incurred an unsportsmanlike conduct penalty from insistence from the sideline that Gough was down.

Norfolk Academy managed to run out the last two minutes of the clock before the Saints offense could come out for one last play, resulting in a 21-16 loss.

The tension on the field between Johnston and one of the referees continued immediately after the game ended while the teams lined up at midfield to slap hands. The coach and official shared words, and one of the other referees grabbed his colleague, pushing him down field to break up what appeared to be an escalating conflict.

Johnston put things in perspective for his team after the game, though.

“Everybody’s got a job to do and we count on everybody, players, coaches, officials to do the best job they can, and I told the kids after the game, we made too many mental errors,” he said.

Similar to the Saints’ other loss against Bishop Sullivan Catholic High School, the first quarter looked like normal NSA football. On the first play of Nansemond-Suffolk’s second possession, Gough rattled off a 68-yard touchdown run, plus the two-point conversion to go up 8-0.

The Bulldogs responded, though, with a 25-yard touchdown pass from their swift quarterback Allan Parrott to Marshal Via.

NSA had some difficulty running the ball, but then caught Norfolk Academy off guard when senior quarterback Jackson DeMello connected with senior split end Michael Tyler Lepore with a quick pass he turned into a 57-yard touchdown.

Parrott, who ended up with seven carries for 61 yards, routinely extended plays with elusive movement in the backfield, and he scored the Bulldogs’ next touchdown on a 19-yard run.

Norfolk Academy’s final touchdown came on a fake field goal attempt that turned into a 14-yard touchdown pass from Parrott to Tyler Holmes. Johnston was upset his team failed to stop the play, despite being warned.

Parrott ended up with nine completions on 17 attempts for 146 yards and two touchdowns.

Following two unsportsmanlike conduct penalties, Lepore was ejected from the game. One of them came on a questionable play when the Bulldogs tackler ripped of Lepore’s helmet.

With regard to Gough’s late fumble, Johnston said he was already working up the next play on the sideline and was stunned to see a Norfolk Academy runner coming down the field with the ball.

“I’m going, ‘What in the world happened?’ In my mind, he was clearly down, but that’s not my call,” Johnston said.

Though running was tough at times, Gough still ended up with 133 yards, a touchdown and two 2-point conversions on 12 carries.

Johnston explained what the team will do to move forward.

“We lick our wounds, and we get back on the horse and get back to work on Monday,” he said. “I told them we are still in third seed for the playoffs.”