Genier ties for second at states 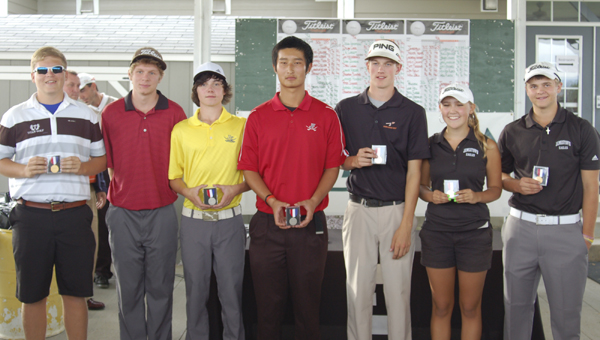 Nansemond River High School senior No. 1 golfer Griffin Genier had a goal throughout high school to qualify for and compete on the state level.

He qualified last week for the first time, and this week, he found he belonged there. Far from being swallowed up by the unprecedented height of competition, Genier finished in a three-way tie for second among individual golfers in the 2013 Virginia High School League 4A State Championships on Tuesday in Harrisonburg.

He shot rounds of 73 for a two-day total of 146 on the par-70 Heritage Oaks Golf Course. His score was tied with Paul Odenwaldt of Loudoun County High School and Zeke Shen of Jefferson Forest High School. They were six strokes behind the winner, Erik Dulik of Dominion High School.

Because the talent level of his competitors was so high, Genier said, “It was very rewarding to tie for second in the state tournament.”

Warriors head golf coach Craig Stephenson was on hand and was very pleased with what he saw. “He held his composure together very well,” he said.

Ranking Genier’s performance in the context of the senior’s time at Nansemond River, Stephenson said. “It was by far his best two rounds under pressure in his four years.”

Genier agreed, also alluding to the tournament’s significance as the conclusion to his high school career. “This is the last shot that I got,” he said.

No one broke par in their two-day totals. Part of this was due to the conditions.

“The course was extremely wet, because they’d been getting the same amount of rain that we had been getting for five straight days,” Stephenson said.

Genier admitted a wet course plays a role but said he was used to it. His regional win came on a damp Sleepy Hole Golf Course.

One reason Stephenson cited for Genier’s strong play in Harrisonburg was being able to play against elite competition, and Genier agreed. “It brings out the best of my game,” he said.

The tournament was not without its rough moments for Genier, however.

“The nerves got to him at one period on Monday, and then he came back, and they got to him again (Tuesday),” Stephenson said.

In the second round, Genier went from being two-under to two-over at one point, “but he was able to hold it together,” Stephenson said.

“Thinking about where I was and what I was playing for made me a little nervous,” Genier said.

He was also not used to playing on a hilly course like Heritage Oaks, but he felt ready for the pressure-packed atmosphere.

“I was pretty prepared for it, because I’ve played in a bunch of high quality tournaments over the summer with the (Virginia State Golf Association) and the College Prep Tour,” he said.

Stephenson said Genier was nearly flawless off the tee, which greatly aided him throughout the tourney.

Though the recent VHSL realignment pits Nansemond River against fewer schools at the state championships now than in the past, NR activities director Nancy Richey put the second place finish in perspective of school history. “I believe this is the best that an individual has done,” she said.