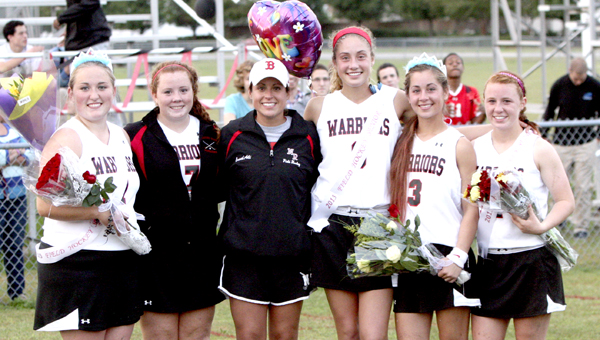 The Nansemond River High School field hockey team returned to its home field on Wednesday evening for the first time in two weeks to take on Heritage High School in a conference match-up on Senior Night.

All five seniors on the Lady Warriors’ roster tallied goals in a 9-0 mercy-rule shortened victory over the Lady Hurricanes.

Some of the seniors to net goals were familiar goal-scorers like forward Kimberly Bates, who scored twice on assists by senior forward Amber Daubenspeck. Daubenspeck scored, unassisted, as did senior back Madison Janek. 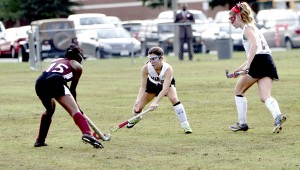 But the other two seniors were back Elizabeth Gover and goalkeeper Brooke Street, both of whom were particularly excited by their time on the offensive end.

“Our teammates tried to help us get a goal,” Gover said, and Street quickly added, “It meant the world to me.”

Nansemond River head coach Ali Mowry had nothing but positive impressions from her team’s performance.

Gover explained why this particular Senior Night held special significance for Mowry. “We were freshmen when she came,” she said, alluding to the coach’s now four-year stint.

“They put in the time, the dedication to the program,” Mowry said.

She said none of them had college play aspirations when they started to play field hockey, “but they still came out here with that effort that they were going to improve every day.”

Tears flowed after the game among both seniors and underclassmen as the seniors were recognized. Bates said the reason why the emotions hit everyone on the team is that compared to previous years, “we’re just a lot closer.”

The game also represented progress within the context of the 2013 season.

“It was important because we need to dominate the rest of the games in order to get second (in the conference),” Bates said.

Mowry was happy to see her team overcome some of its previous issues, noting her girls “finally scored in transition.”

Nansemond River improves to 8-4 overall and 3-1 in the conference.